Before explaining in detail what separates Super Meat Boy Forver from Super Meat Boy at all, let’s start by specifying some points in common between the two titles, of which the filiation is all the same very real . Thus, the scenario again features our bleeding hero Super Meat Boy, his pink companion Bandage Girl, and the villainous Dr Fetus who does nothing but annoy them! But while the vile embryo in armor / costume systematically kidnapped Bandage Girl in the first installment, a new victim has been found this time in the person of Nugget, who is none other than the child of Super Meat Boy and Bandage. Girl. As basic and pretext as it is, this story is still told to us through nice little cutscenes, whose frankly cartoon artistic direction works very well. These sequences also remain perfectly in line with the graphics of the game, which offer bright colors and thick outlines, to ensure excellent visibility in all circumstances. 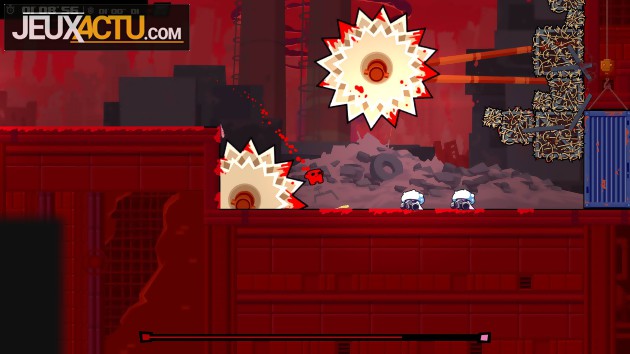 Whatever obstacles come your way, we always understand what the game expects from us (after a few tries naturally unsuccessful). Moreover, Super Meat Boy Forever knows how to renew itself and presents us with very varied levels. If the game starts smoothly with only a few circular saws to avoid, we find ourselves fairly quickly having to manage fans that deflect us from our path, conveyor belts, crumbling walls, expanses of deadly syringes, walls. glass to break, keys to pick up, locks to unlock, movable hooks to grip, switches to operate and much more. The game offers twelve different worlds, reinforced by the presence of warp secret zones, and regularly makes us face very nice bosses. These are the opportunity to vary the gameplay even more, and it is up to the player to master the attack patterns of these often gigantic enemies to be able to overcome them.

[19459002 ] But then, what can be the rupture between this episode and the previous one? In truth, Super Meat Boy Forever departs from its predecessor on two essential points, the more important of the two concerning controls. We are no longer dealing with a classic platform game, where we can direct our cube of meat as we wish, but with an “autorunner”. Understand by this that Meat Boy is constantly going straight ahead, and that you have absolutely no control over his speed or direction. Moreover, two keys are enough to handle our hero. One is for jumping or hitting enemies while in the air, while the other is for sliding or diving down. The game seems to have been designed for mobile platforms, and this lack of control over the action may put off many regulars. The first steps are extremely confusing, especially when you want to turn around and realize that this maneuver is totally impossible to perform, unless you find a wall on which to bounce. Which is not always a good idea, since reaching the left edge of the screen generally results in outright game over. However, we invite all those who are resistant to this automatic race who already have the game to persist in their efforts, because we end up getting used to this system all the same. 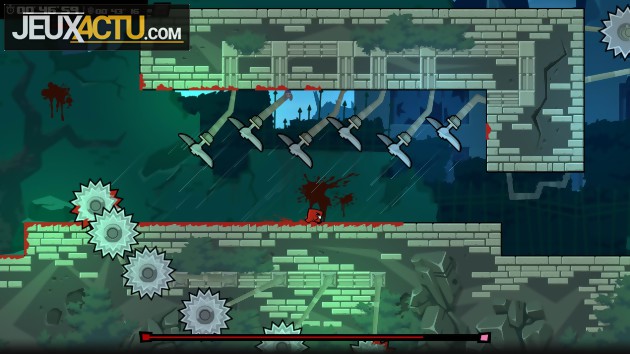 The other big change made by Super Meat Boy Forever concerns the architecture of the levels, which are now generated randomly from 7200 different sections. This is obviously good news in terms of replayability, but you still lose all the subtleties and the small onion balance of a completely handmade level design. It also complicates speedruns and the search for solutions, even if a seed system still makes it possible to generate, and therefore compare, identical parts.

IT’S NOT FRESH MY MEAT?

Fans of the license may therefore be quite disturbed by the direction of this new component, which we almost want to call a spin-off rather than of real continuation. Fortunately, there are still a few benchmarks to stick to, starting with the die & retry aspect, which is as important as before. The fact of dying in a loop is almost highlighted, since the replay of a game shows all the unsuccessful Meat Boy at once in addition to the one who managed to pass the level. Good prince, the game automatically places save points at the entrance of each of the sections forming an entire level, which helps to pass the pill of countless deaths. In the event of failure, we retry instantly and without having to repeat an already successful step. 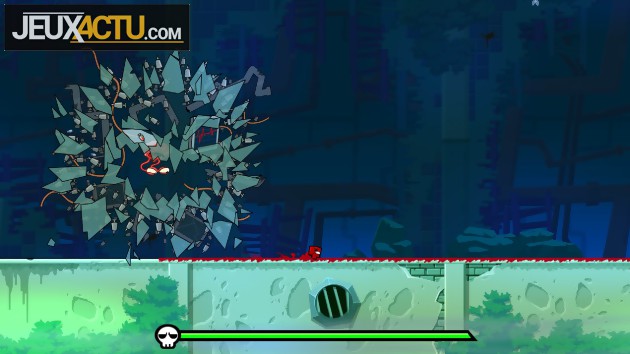 For the fiercest, Super Meat Boy Forever offers a scoring system (zero deaths to reach S rank in a level) as well as pacifiers to collect in certain levels. These objects take over from the dressings of the 2010 Super Meat Boy, and therefore allow you to unlock new characters. Unfortunately, the PC version that we tested also takes into account a very annoying bug, which was never corrected in the previous episode and which will therefore perhaps have to be endured ad vitam æternam here too: the impossibility to play the controller. This obviously does not concern everyone, but we are among the unlucky ones affected by this curse. This regrettable bug is coupled with an additional problem, which this time concerns the keyboard. In the middle of the game, it is impossible to pause the game or quit the level other than through a brutal Alt + F4. The only alternative solution: reach the end of the level to be able to return to the selection screen. Again, not everyone is affected by this problem, but it still reflects a rough finish. 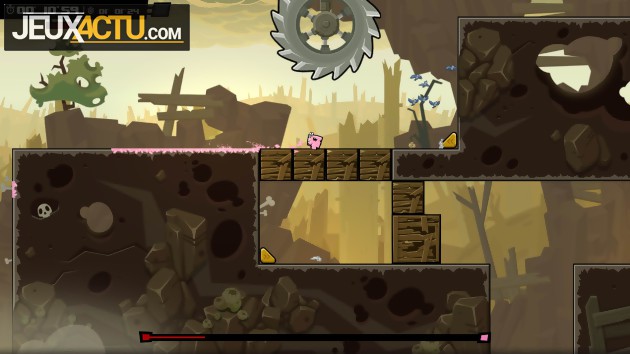