With only 13.5 million units sold to gamers throughout its career, the Wii U has really not been a big success for Nintendo. Unlike the Switch which, in less than four years, has already exceeded 68 million copies sold. This explains the transfer of many games from the black sheep to the goose that lays the golden eggs, via various ports and other remasters. We’ve already got our hands on the Switch version of Super Mario 3D World, the latest adaptation to date. As its title suggests, it has a big bonus in store for us featuring an even more furious Bowser than usual.

But let’s start by looking at the original game, which takes advantage of its arrival on Switch to expand its multiplayer capabilities. While the Wii U version was only playable for four people locally, in 2021 it becomes possible to mix Mario, Luigi, Peach and Toad as desired: i.e. locally or online, with possibly two players on the same console. Going through the adventure together is obviously not compulsory, but alone, we still deprive ourselves of the pleasure of lifting and throwing our friends. The technical capabilities of the Switch are sufficient to run the game at sixty frames per second, aided in this by the usual artistic direction of Mario games, not technically demanding but very effective visually. In addition, the movements of the characters in the sets have been significantly accelerated compared to the Wii U version, in order to boost the gameplay even more. 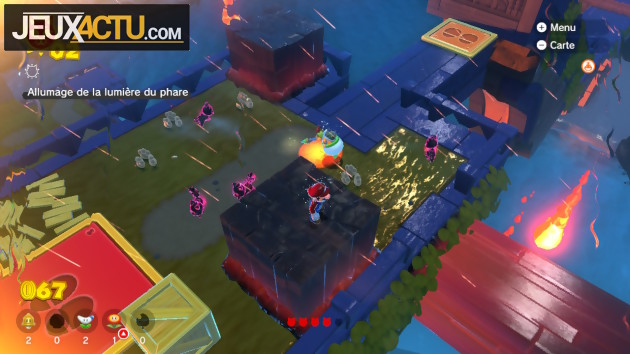 In the department of novelties we also find compatibility with amiibo, which trigger the appearance of useful objects, as well as a relatively advanced photo mode, which allows not only to change the angle, the zoom level and the filters, but also to add logos or stickers to the capture, the latter corresponding to the seals collected in the different levels. Smart! The Switch’s “motion gaming” is also used since it is possible to point the screen with the right joycon, in order to control a cursor allowing for example to modify the position of certain blocks. It is also possible to perform this action by directly touching the screen if playing in portable mode. In substance, however, the game remains perfectly identical to its ancestor. It is always a question of freeing fairies captured by Bowser, by traversing in limited time relatively linear levels but well done. The iconic cat costume, which allows pawing and climbing walls, is also back. The same goes for Captain Toad’s mini-levels, which you can turn around to find the best way to access stars. 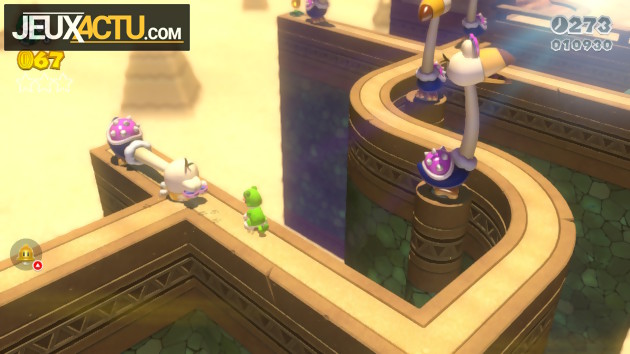 BOWSER VS MARIO: ONE WILL FALL

[ 19459001] If you want real good big news, it is towards the Bowser’s Fury segment that you will have to turn. Accessible from the main menu alongside Super Mario 3D World, Bowser’s Fury is actually a game in its own right, totally separate from the original adventure and quite different. Moreover, it is not possible to play four but only two, asymmetrically what is more since one of the players plays the good role (Mario) while the other is content to direct his subordinate. (Bowser Jr.). In solo, it is the artificial intelligence which directs the offspring of Bowser, according to a level of assistance adjustable on three notches (not at all, a little, a lot). Relatively autonomous, our teammate can collect coins, kill enemies or even reveal bonuses by repainting certain areas of the decor. To do this, it is possible to indicate a point of interest with the cursor or in touch mode.

If Mario finds himself teaming up with Bowser Jr., it is because the latter’s daddy seems to have gone wild. More threatening and gigantic than ever, it is now covered with a strange dark matter, which also stains certain elements of the decor. To clean up all this, Mario will have to turn on headlights thanks to the harvest, not of stars or moons, but of Feline Stars. Unlike Super Mario 3D World, which is divided into different worlds and levels, Bowser’s Fury offers us a completely open area, in which we can move freely. Another interesting point: Bowser regularly emerges from the waters in an unscripted way (in the sense that these sequences do not trigger according to the player’s actions) for a fit of fury that significantly changes the situation: the storm rises, the rain subsides. starts to fall, the sky darkens and flaming projectiles fall all around our dear Mario, thus complicating the task for a few minutes.