While waiting to receive the test of the new range of Samsung televisions which will animate all year 2021, we were able to discover them a little more closely on the occasion of an event organized in the showroom of the Mark. The new QLED and Neo QLED products were on display there, here are our first impressions. 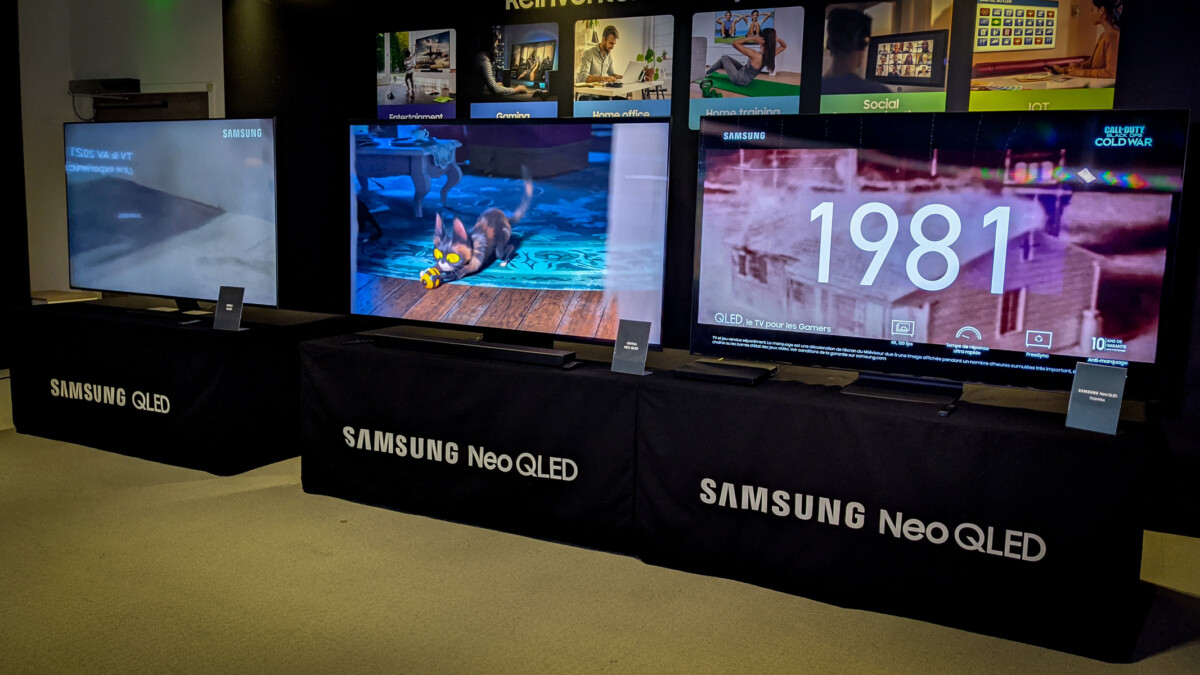 As expected, things are scrambling in the TV market. After the many announcements made for a fully digital CES 2021, it was only a matter of weeks for the ranges to become clearer. Samsung has recently unveiled the official prices as well as the different sizes of panels that make up the Neo QLED range (therefore with Mini LED backlighting) and we have shared them in this article .

While some manufacturers raise concerns about the shortage of components and the complexity of disrupted logistics (due to the pandemic) which could drive up prices, the South Korean giant attacked from the outset by reimbursement offers up to 500 euros . Other manufacturers should do the same (HiSense has already told us that it will implement this type of operation) so as not to slow down this market which has been booming since last year.

Quick tour of the range

During this quick presentation, we were able to discover the future Crystal UHD models of the AU8500 series – which succeed the TU7025 and TU8305 – and as well as the QLED Q60A (replacing the Q60T), but we will not dwell too much on these models.

Note, however, that they will ship with version 6 of Tizen OS and that special work on the design of these Edge LED models has been done to make them thinner and more attractive. 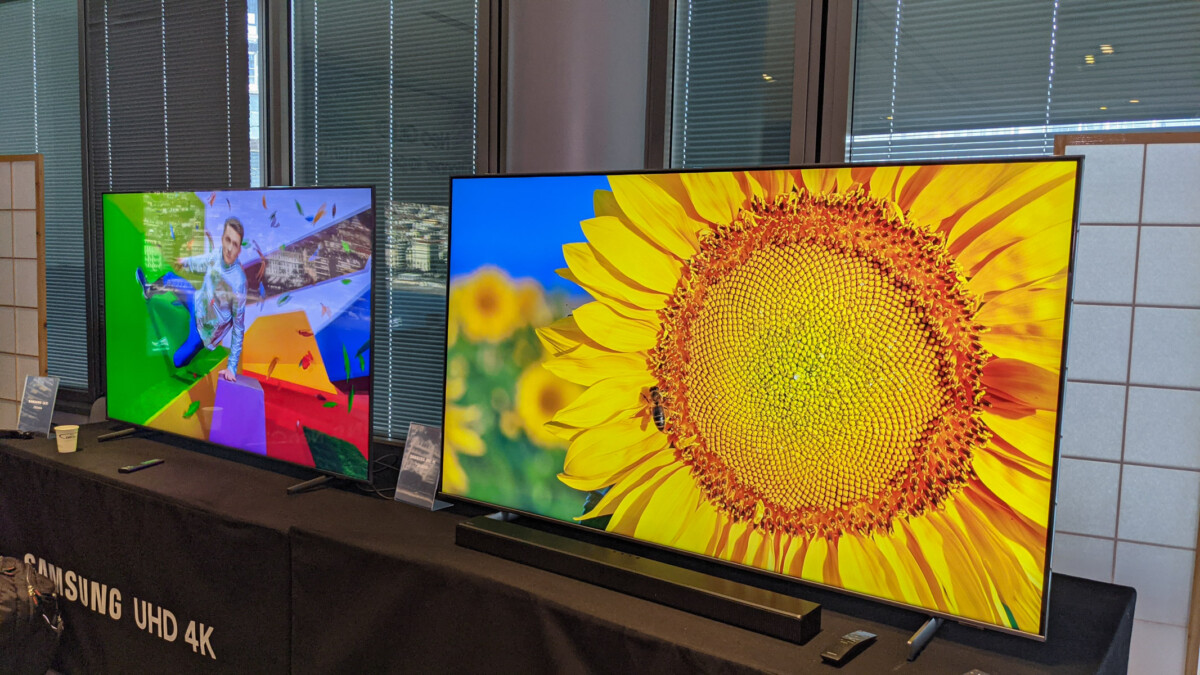 Small detail which is however of great importance, from the QLED Q60A model, the televisions will be delivered with a remote control which changes little in appearance, but which nevertheless integrates on the back a small solar panel allowing to recharge it in daylight as well as in artificial light.

On the front side, the remote control changes little

But on the battery side, there is a solar panel to recharge it.

Samsung is also planning a USB Type-C port for refueling, but in absolute terms we’re done with the batteries! However, the remote control seems very light in the hand and we do not yet know whether this is a good thing or not, both for the grip and for the quality and robustness of the zappette. 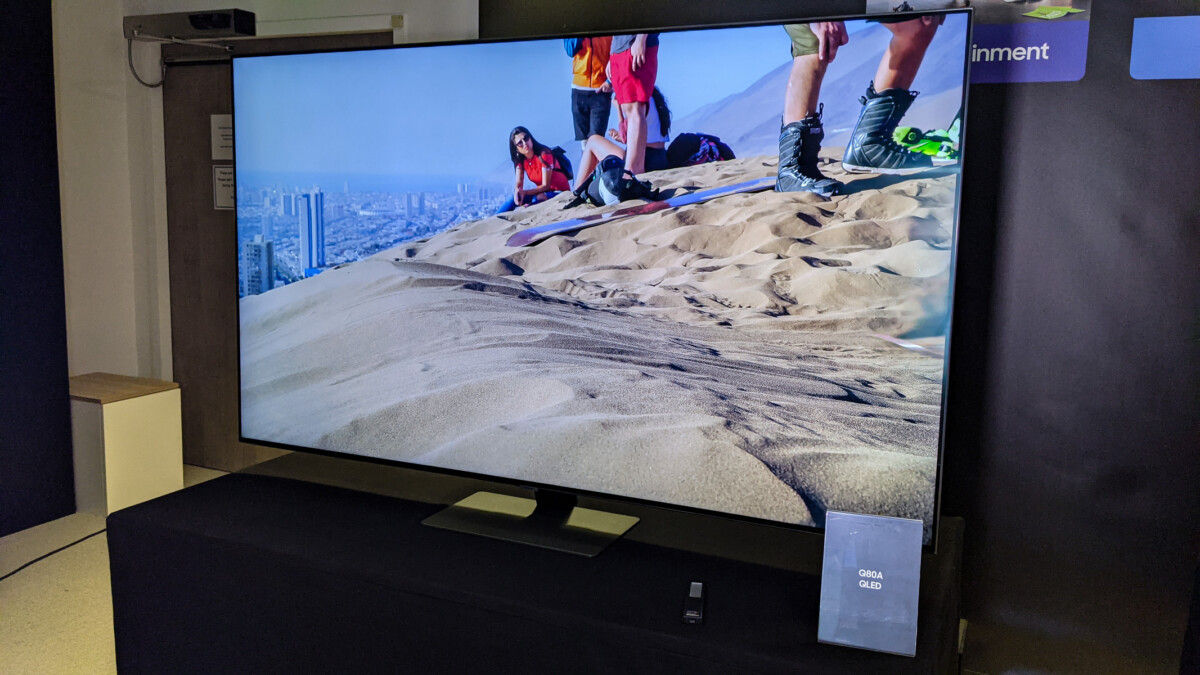 The classic QLED range ends with the Q80A, replacing the Q80T, and it is also the first model to use a 100 Hz panel (50 Hz for the others) and therefore also to benefit from a full HDMI 2.1 socket format. In short, this is the “entry-level” product to favor if you want to connect a console or a latest generation PC in order to play in 4K @ 120 Hz. The Q80A is also the first model of the family to take advantage of OTS (Object Tracking Sound) audio technology, provided by a 2.2.2 hp system with a total power of 60 watts RMS. 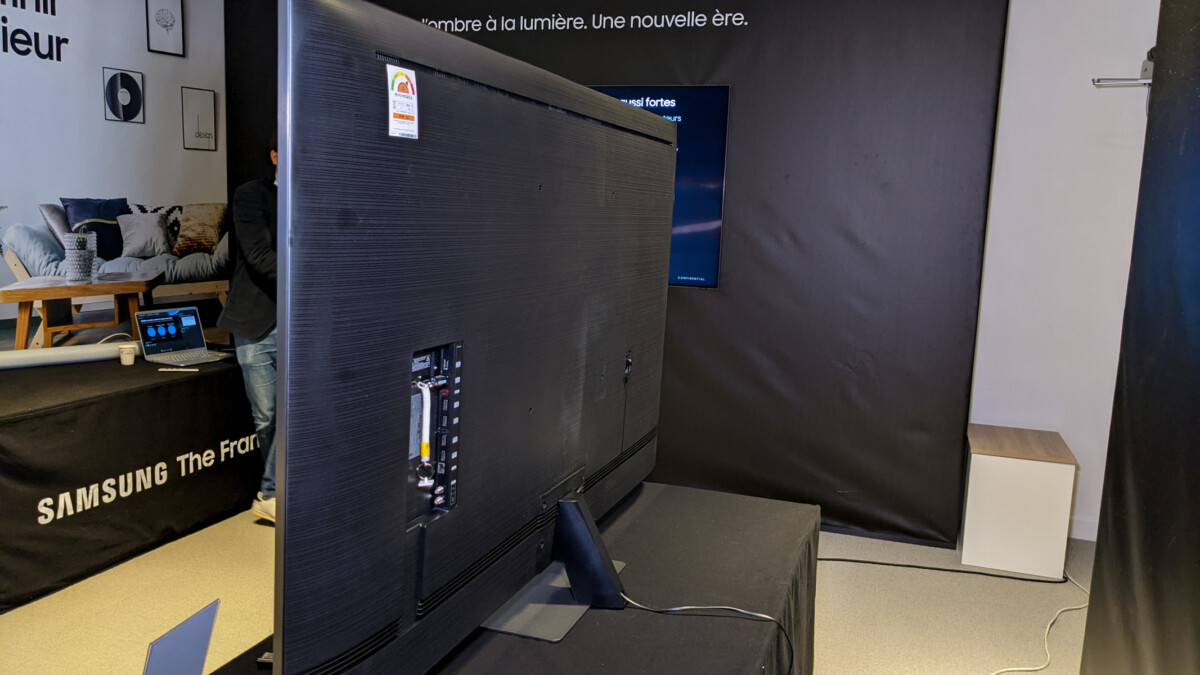 We were really (but really!) Looking forward to seeing what has in store for us with the mini LED technology operated by Samsung and called Samsung Neo QLED . As a reminder, this is still a TV with an LCD panel, the contrasts of which are boosted by Quatum Dots, but there is a subtlety of size on the backlight side. Indeed, where current LCD televisions use packs of LEDs driven by a few tens or hundreds of zones, in the case of the Mini LED, the backlighting of the panel is provided by LEDs 40 times smaller . You have certainly understood that, for an equivalent display surface, thousands of additional diodes are integrated, driven by hundreds of zones. Samsung mentions nearly 700 zones , but for the moment the details are not fully known to the French teams.

As a result, not only is the brightness better, but above all, the management is much finer, reducing light leakage and further boosting the contrasts and the sharpness of the image.

Here it is! The one we were the one we were eager to discover: the Neo QLED QN95A. Note that it could also be found under references QN97A in some brands, but the differences only concern the frame colors. Remember that the model is available in 55, 65, 75 and 85-inch versions at respective prices of 2299, 2999, 4499 and 5999 euros, excluding reimbursement offers for the launch which are 300 euros for the 55-inch and 500 euros for the larger models. Come on, remembering those references will be a new exercise in diction, since a 55 inch in QN95A will have for full reference: QE55QN95A … so imagine if you had to add the term Neo QLED on top of that. 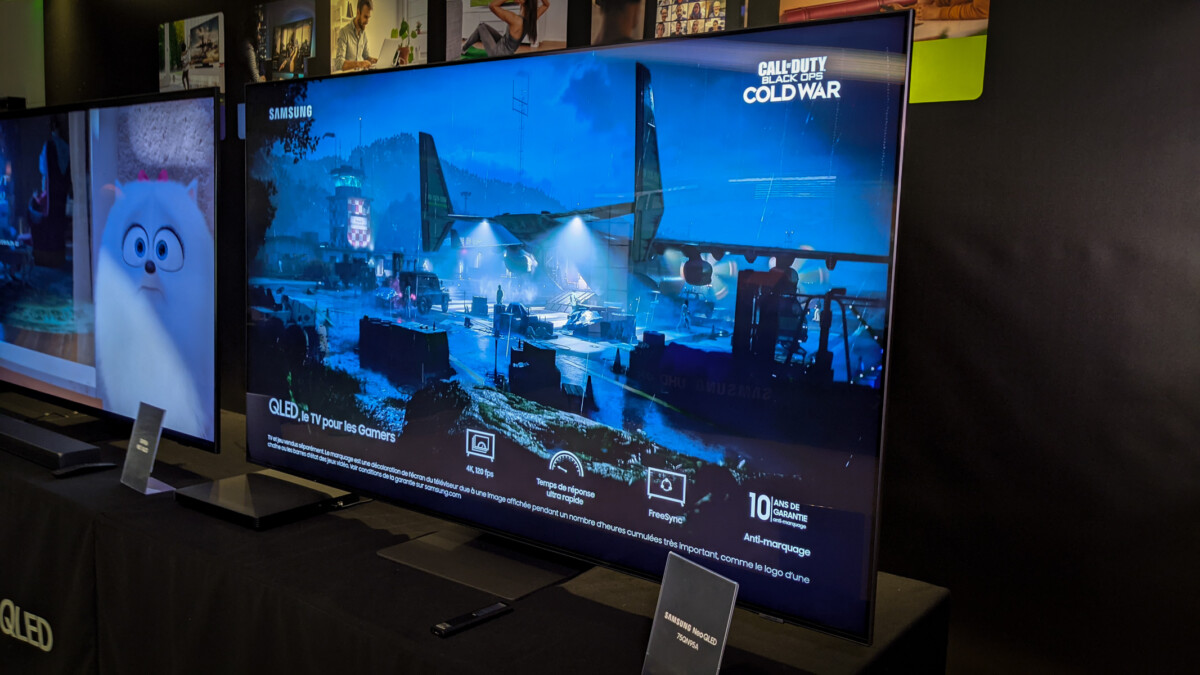 For obvious reasons, we will only give a cursory review of which purports to be the top-of-the-line NEO QLED Ultra HD model. Aesthetically, it’s pretty close to last year’s Q95T. We find the practical and discreet central foot, but the chassis is even thinner. From 55 to 85 inch models, the frame is no more than 3 cm thick. This is one of the main advantages of the Mini LED backlighting. 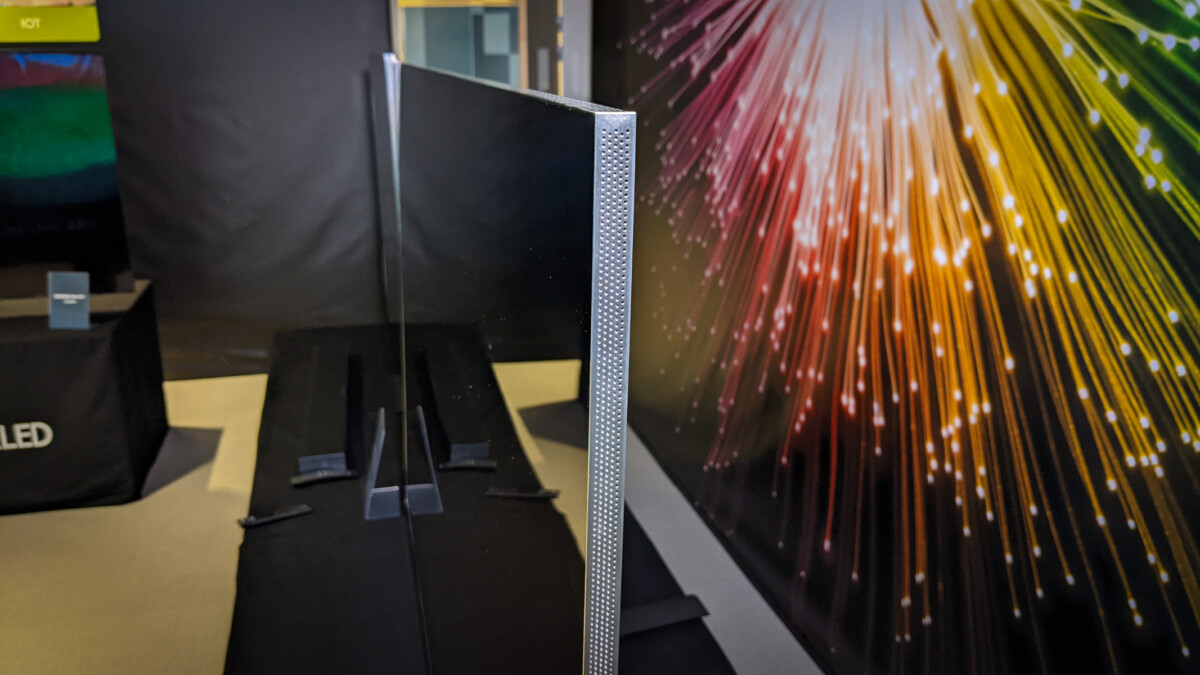 A frame that is less than 3 cm thick

The most impressive thing is what we will have a hard time putting on stage here – especially with so little time on site, in a rather poorly lit show room and by yellow lights what is more. it is difficult to judge the intensity of the contrasts. So certainly the Quantum Dot technology and the QLC filter were already helping to produce an astonishing rendering last year, but there … it’s another world. 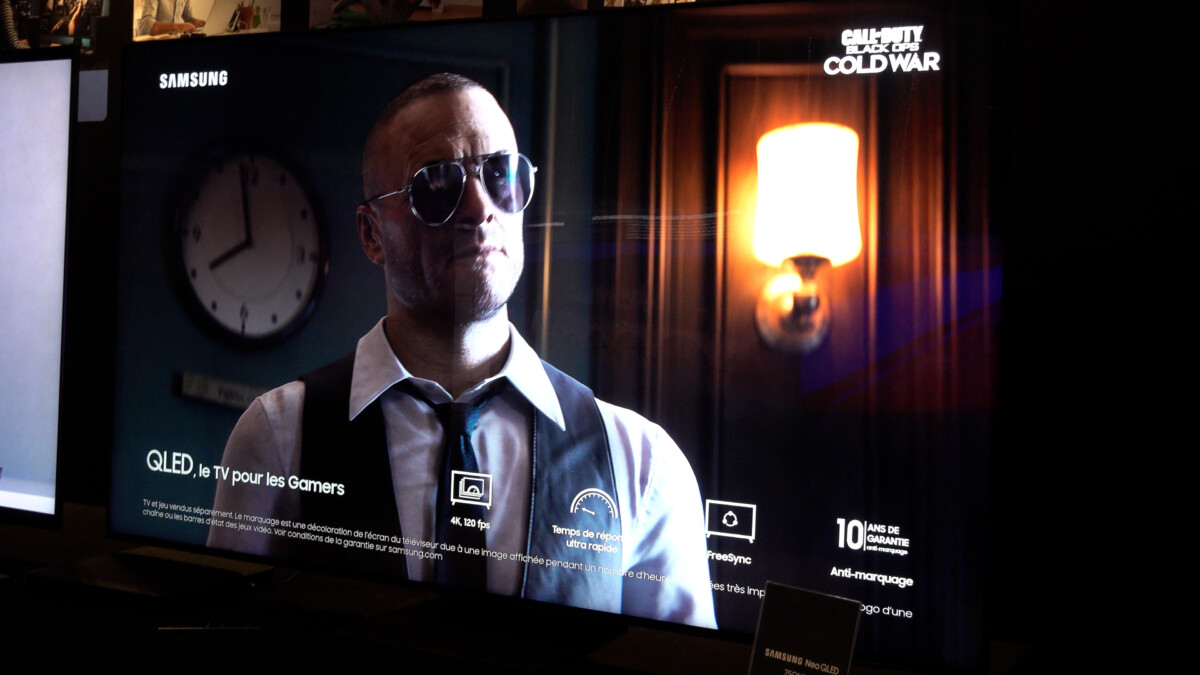 Samsung can’t officially say anything about the thousands of LEDs and hundreds of areas that make up this next-generation backlight, but the progress is impressive. Beyond the fact that the blacks are really intense, the light leakage effect of LCD technology is greatly reduced. And yet, we are faced with so-called “pre-production” models. Understand that small improvements could emerge on the “mass prod” models that will be delivered from April 2021. 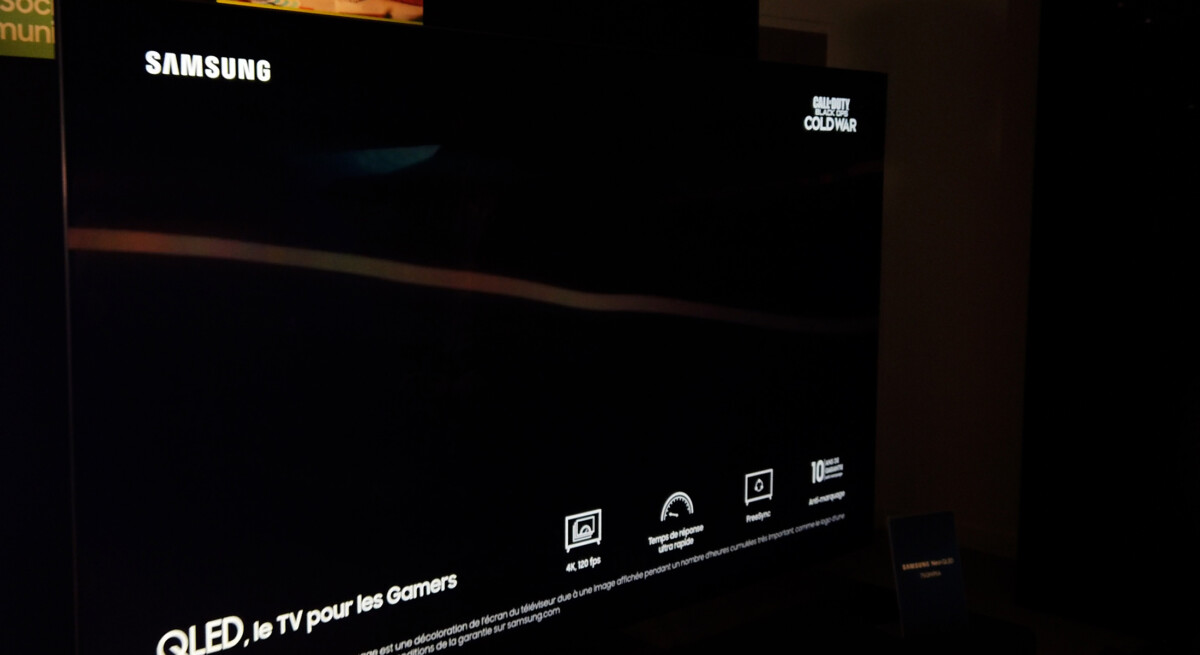 Here again, it is very difficult for us to highlight what we have in front of our eyes, but the precision of these Samsung inscriptions and these texts in white on a black background (finally quite close to a subtitle in a film or a series), allow us to notice the increase in precision and therefore in quality. We look forward to discovering all this in more detail with our usual test content, but also to put this TV to the test in gaming use.

We know that Tizen OS 6 now has a “game bar” which allows you to adjust the TV settings according to the type of game played. Because we didn’t take a console or a PC with us, we couldn’t figure out what it looks like, or even how the 21: 9 and 32: 9 display works. 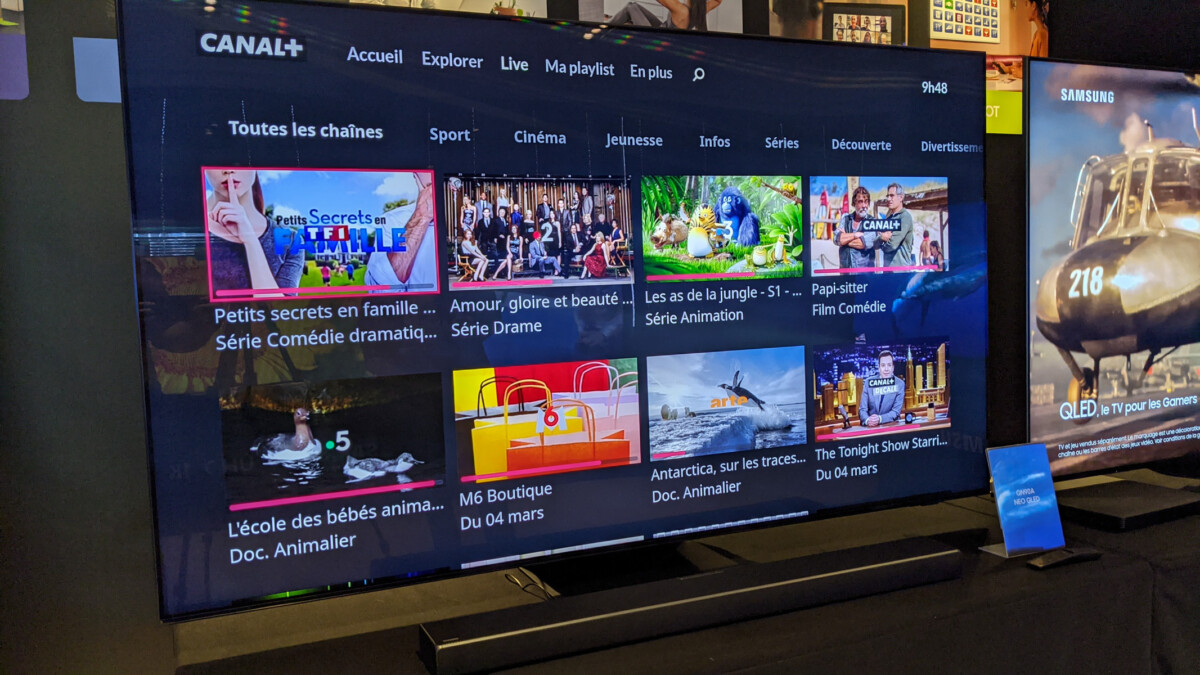 Tizen OS 6 and the Canal + application

This new version of Tizen OS also offers a multitude of new features that we have already covered in the Neo QLED presentation article . Naturally, we will come back to this when testing these TVs. However, we were able to realize that this operating system remains very fluid. Note that Samsung would be one of the first to reproduce the new Canal + box interface directly from its application on Tizen OS. Not to mention that Bouygues subscribers can even do without their TV box since, again, an application is available on the television. All you need to do is enter your login details. 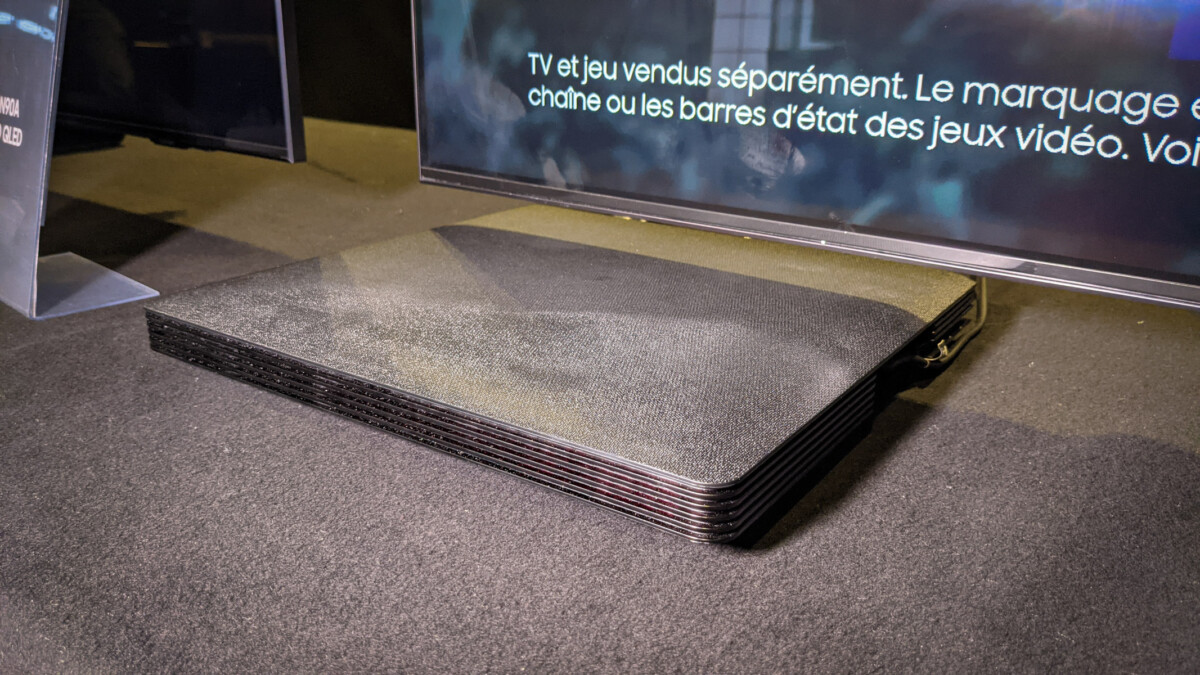 The One Connect box has evolved considerably

Regarding the One Connect box, in this new version, it is now more like a living room turntable. The most important thing to remember is that, thanks to this, the QN95A will be the first to integrate four HDMI 2.1 ports with all the functions (4K @ 120, ALLM, VRR and e-ARC) on each of them. them. To put an end to these Ultra HD models, let us add that Samsung has not yet received in its showroom QN85A, little brother of the QN95A, available in 55, 65, 75 and 85 inches at the respective prices of 1790, 2499, 3499 and 4999 euros excluding ODR.

The back of the One Connect case

The rear of the QN95A

A few technical characteristics distinguish them, such as the light output (HDR1500 for the QN85A and HDR2000 for the QN95A), the connections linked to the One Connect box absent from the QN85A, or even an audio power slightly favorable to the QN95A. Count 70 Watts in 4.2.2 ch for this one against 60 Watts in 2.2.2 for the QN85A.

Samsung NEO QLED QN800A and QN900A: the must of the mini LED goes through the 8K

Again, we have too little information regarding the technical details of the 8K models, but these will simply benefit from this Samsung doing the best in mini LEDs. The manufacturer promises to tell us more during a briefing with the engineers. 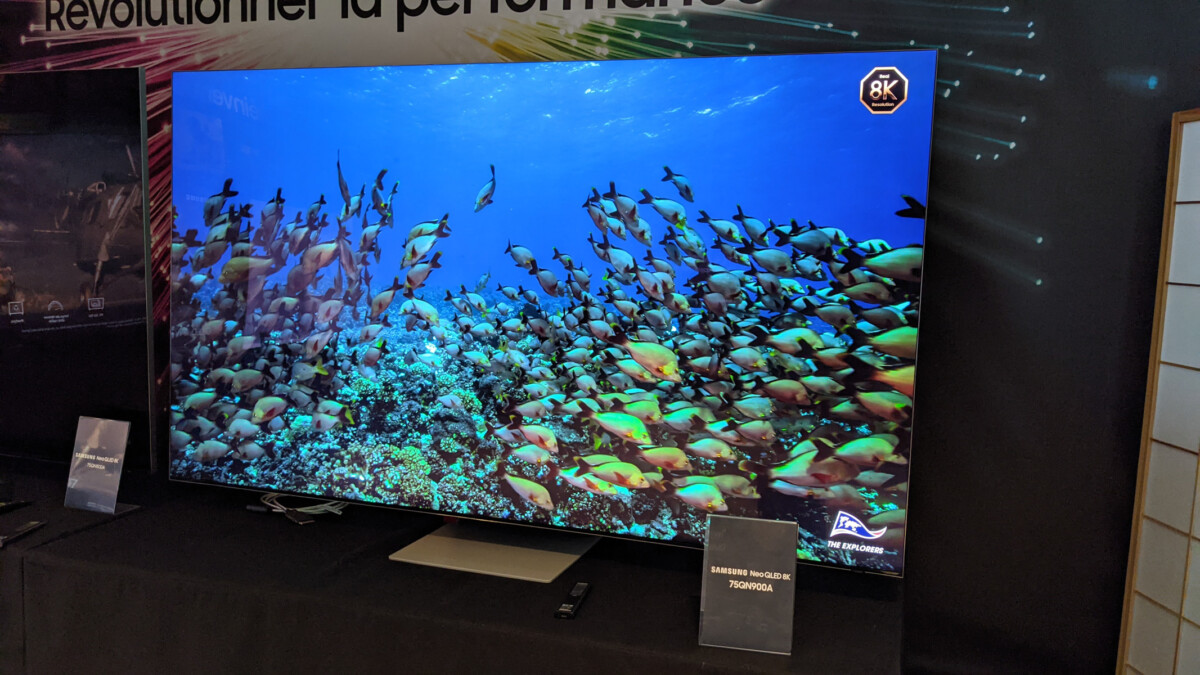 The image we saw unfolding before our eyes was quite sumptuous, but again we will refrain from issuing any verdict. Not without having put your nose into the TV setting options. Indeed, on the few demo loops that we were able to watch, the image sometimes seemed a little too artificial.

Again, these are not definitive models, but we might be faced with our concerns that the proliferation of digital processing applied by the Quantum Processor 8K (and its 16 neural networks) could ultimately create a made undesirable. In this case, it is here the motion compensation that seemed to us a little too present. This might not suit our eyes as Europeans who like a cinema look that is neither too fluid nor too saturated. Again, we’ll check all of this in testing.

A small cable is supplied in addition to the large cable

The One Connect box can be hung on the TV stand

QLED technology generally offers a good compromise between LCD and OLED while being a little more accessible. Here is our selection of the best QLED TVs of the moment.
Read more