True standard-bearer of the Mercedes range, while waiting for the EQS, the 100% electric sedan, the S-Class remains the technological showcase of the brand and carries a list of equipment as long as the arm. We were able to try them out. 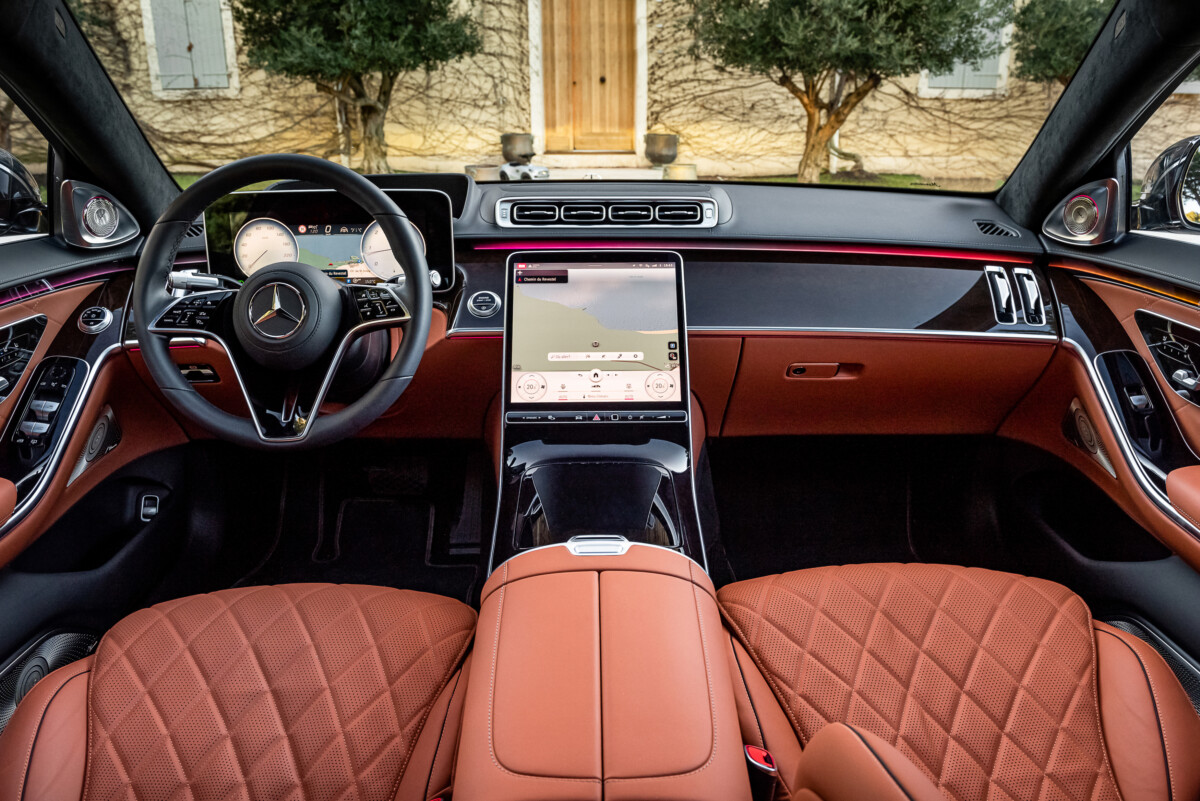 The interior of the Mercedes S-Class // Source: Marius Hanin

“S” stands for “Special”, the Mercedes S-Class is special in more ways than one and not just its seventh and latest generation, the technologies of which we will present to you today. For decades, the S-Class has been a car that has become inseparable from the history of the automobile . Since the 1950s and the Type 220, seven generations have passed and three million units have been sold worldwide.

The flagship of the star firm, it is also the standard bearer of the automotive industry when it comes to technology, especially when it comes to safety. Several technologies, now democratized, have been introduced in the S-Class, notably ABS in 1978, the first airbag in 1981, the first ESP in 1995 and the first adaptive cruise control in 1998.

This new generation of Mercedes S-Class showcases high-level driver assistance technologies, while accentuating the on-board experience by pampering both driver and passengers. We will therefore, through this dossier, sift through all the technologies presented aboard one of the most technological and luxurious cars on the automotive market.

Up to five screens on board

Almost all new cars have one or two screens. More generally, this is the central screen, which is tactile and which manages all of the car’s controls, the second replacing the instrumentation system. These two screens, we obviously have them within the Mercedes S-Class, with three other screens behind.

The two main ones are attached to the headrests at the front, are tactile and are 11.6 inches. The last screen is a touchscreen tablet supplied by Samsung and which integrates the MBUX application . This allows rear passengers to control several elements of the car, mainly the multimedia system. 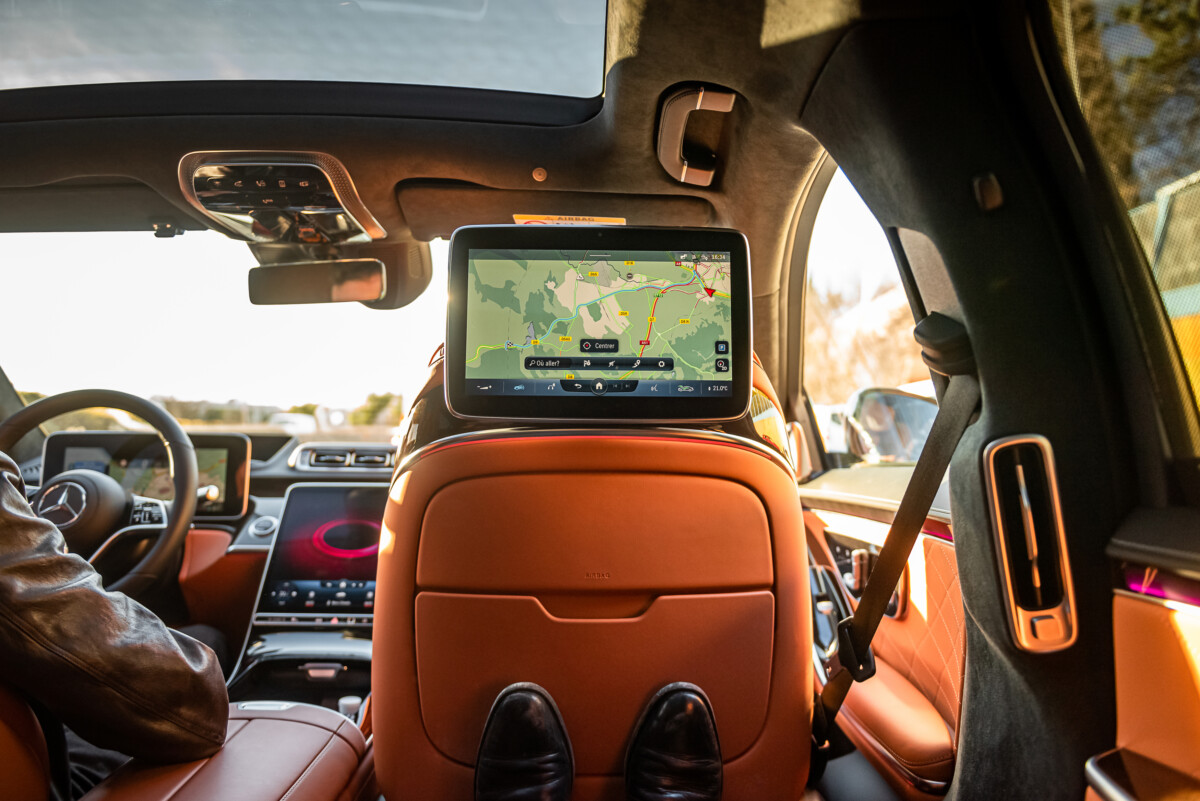 Inside the Mercedes S-Class, in place of the President // Source: Marius Hanin

This is the technological heart of our Mercedes S-Class. With a beautiful resolution of 1888 × 1728 pixels, this touchscreen allows you to control absolutely all the functions of the car . This screen is also reminiscent of that of some Tesla and allows you to manage driving assistance systems, multimedia, active ambient lighting (with no less than 64 colors), or even locate you precisely in space thanks to a parking system working with cameras to model the environment around the vehicle.

This screen is obviously customizable and has a biometric identification in order to record all the data and preferences of the various users of the car. A rather practical technology for vehicles to be used by several drivers for example.

This screen, which replaces the classic hands, appeared in 2014 on the Audi TT. Almost all modern cars benefit from this screen, which allows you to customize how it is displayed. From the two classic tachometers to your navigation, including your consumption data, you will be able to know absolutely everything about your driving in real time via this customizable digital display .

It also benefits from a 3D display with two cameras placed side by side which serve to capture the image of the driver and use an algorithm to detect his eyes. On our side, during our test, we were not really convinced by this 3D system (which it is fortunately possible to deactivate) and which rather tended to force us to force on our eyes to see there properly.

The augmented reality head-up display, on the other hand, is more convincing; it complements the driver’s visual field with rather well-realized virtual indications that do not distract the driver. Large blue arrows come in above a junction to show you more precisely where to turn. 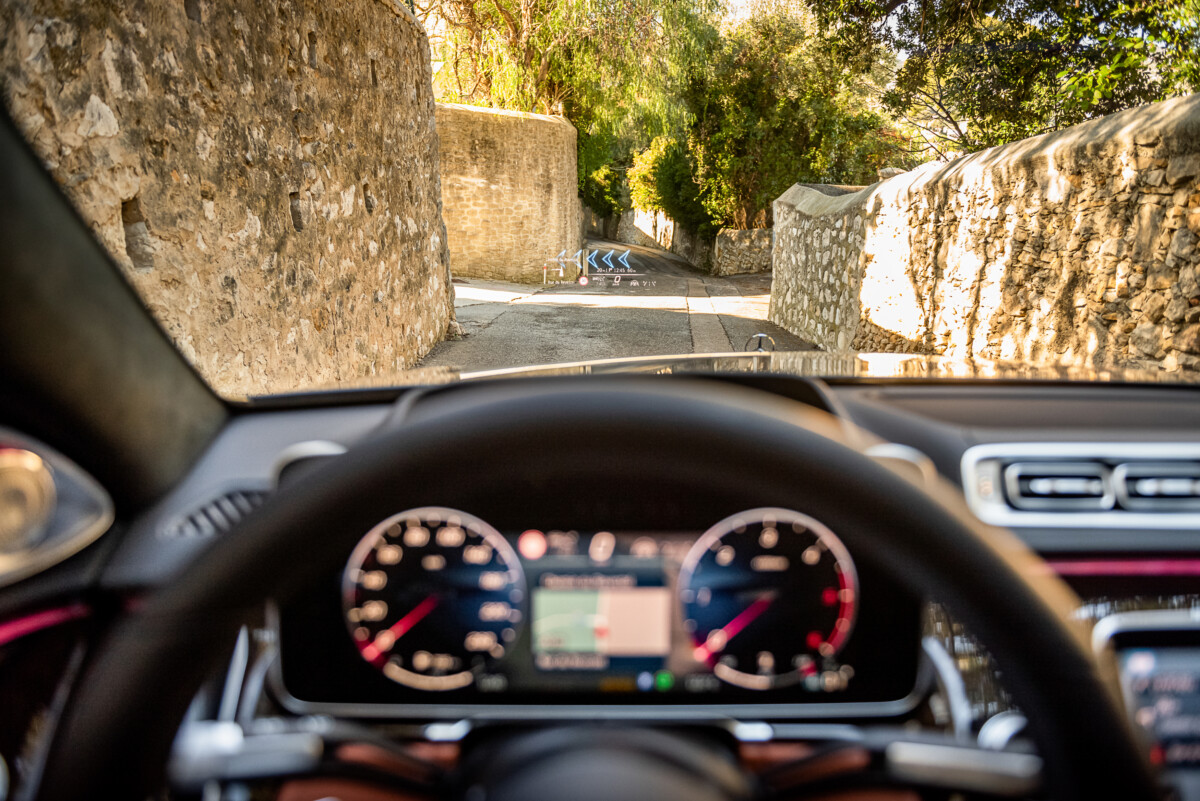 Within an option called “Business Class” and billed for a trifle of 34,500 euros (in addition to the car which starts at around 100,000 euros), you can have two screens at the back allowing you to watch the TV, listen to music, and even manage navigation by entering new GPS data by sending it to the driver’s screen. You control almost everything via these screens , and if you choose to stretch your legs and move the front seat back as far as possible, don’t panic, the small removable shelf located at the armrest will come and help you .

This tablet, supplied by Samsung, therefore embeds the MBUX application (for Mercedes-Benz User Experience) connected to the car. You will be able to do the exact same things as with the rear screens. Except that the tablet in our test model was sometimes quite temperamental, with some latency and several bugs. Pity.

On the back of the Mercedes S-Class // Source: Marius Hanin

At the rear of the Mercedes S-Class // Source: Marius Hanin

The rear seats of the Mercedes S-Class // Source: Marius Hanin

The Mercedes S-Class is equipped with an “interior assistant” which reacts to the actions of the driver . For example, a glance back over the shoulder allows, if reverse gear is engaged, the rear window sunblind to lower for better vision. Another example: when the driver puts their hands close to the central screen, artificial intelligence acts by enlarging or highlighting elements of the home screen.

To adjust a mirror, you no longer need to select it beforehand, you just have to look at it and then adjust the position of the mirror. Simple hand gestures are also used to manage the lighting functions. We also find the famous voice command that can be activated by saying “Hey Mercedes”. You can then ask her practically anything (even what she thinks of BMW or Audi …), such as raising or lowering the blinds, raising or lowering the temperature, or even putting on a particular radio. 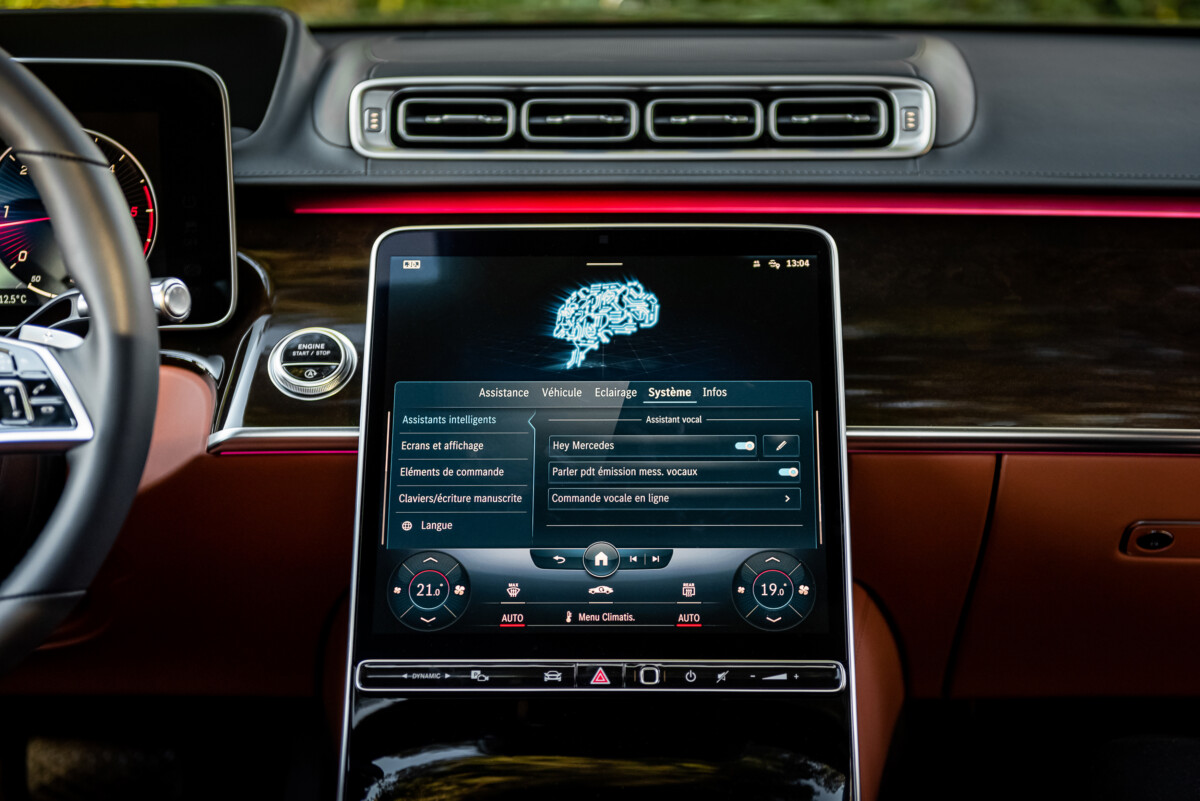 Voice control can be deactivated via the central display // Source: Marius Hanin

She thinks of your well-being

Are the massage parlors closed at the moment? No problem, at least for S-Class owners. Thanks to the “Energizing Pack”, the car will pamper or tone its occupants with various programs . There are five types of programs: “Heat”, “Vitality”, “Well-being”, “Pleasure of the senses” and “Freshness”. When you activate any of these programs, the ventilation, heated, ventilated and massage seats, and mood lighting will work together to relax or tone you up.

There are even exercises on video to, for example, relax muscles. This function is only available when stationary, while driving only audio works. There is also a kind of “virtual coach” that works in conjunction with Mercedes-Benz smartwatches manufactured by Garmin. These watches collect certain data in order to adapt a personalized program according to the stress level of the occupants, or the quality of their sleep. The “coach” then gives recommendations that can be followed by activating a personalized program.

Welcome to the cinema

As mentioned above, it is possible to watch TV on the two screens at the back. It is also possible to watch a movie by having it previously recorded on a USB key or a storage device. It will then be possible to play the film on the back screens. Unfortunately, the car does not have a video on demand application like OCS or Netflix .

The experience is however quite striking, notably thanks to the Burmester “4D Surround” audio system composed of 31 speakers , a subwoofer and eight “exciters” in the seats, each equipped with an amplification channel. In total, the Hi-Fi system provides 1350 watts . The result is striking and gives the impression of being in a real movie theater, with a clear and limpid sound and real sensations in the seats. And if you want to watch a movie that is different from your neighbor, it is possible, all you have to do is connect a headset via a jack or Bluetooth to enjoy your movie, you and you alone.

An enclosure is located just above the rear passenger seats // Source: Marius Hanin [19459002 ]

On request, it is also possible to have high quality Mercedes headphones / / Source: Marius Hanin

You can connect your storage space thanks, in particular, to two USB-C ports / / Source: Marius Hanin

The Mercedes S-Class includes just about everything that exists in the field of driving aids . The listing is as long as the arm and includes, among other things, automatic emergency braking, adaptive cruise control, steering assistance, lane keeping assistance, lane change assistance, recognition of traffic signs, active monitoring of blind spots, etc. All this armada allows him to display level three autonomous driving … but unavailable in France because of the legislation in force. The Germans will be luckier since this system will be legalized from the second half of 2021 on their roads.

Above, we told you about the few technologies that the previous S-Class were able to introduce. The new generation is the first production car to be equipped with a front airbag for the seat passengers. An airbag between the driver and the passenger is also added. To top it off, in the event of an imminent side impact, the car can lift up to divert the energy of the impact to the lower, stronger parts of the structure.

Some driving aids can be deactivated // Marius Hanin

Lighting is also a point on which Mercedes worked // Source: Marius Hanin

What future for the Mercedes S-Class?

As you know, the future is electric and Mercedes will be no different . The brand is preparing an unprecedented offensive and the equivalence of the S-Class in electric, it will be the new Mercedes EQS . The manufacturer has already shown us some parts of the car, including its gigantic curved screen called Hypersreen . The EQS will have engines ranging from 286 to 640 horsepower and up to 700 kilometers of range . It will be offered in two or four-wheel drive and with a battery pack ranging from 90 to 108 kWh depending on the version. It will be marketed at the end of 2021.

The Mercedes EQS in its form of show car

The Hyperscreen MBUX of the future Mercedes EQS // Source: Mercedes

If, for the moment, the Mercedes S-Class and EQS will coexist in the range, the future of the S-Class, both in thermal and in plug-in hybrid, could be compromised in view of new environmental standards. But until then, there will still be plenty of time to change.