HP returns to the attack on the small VR market with its HP Reverb G2 headset. Developed with Valve and Microsoft technologies, the headset is a high-end alternative to Oculus. We put it to the test. 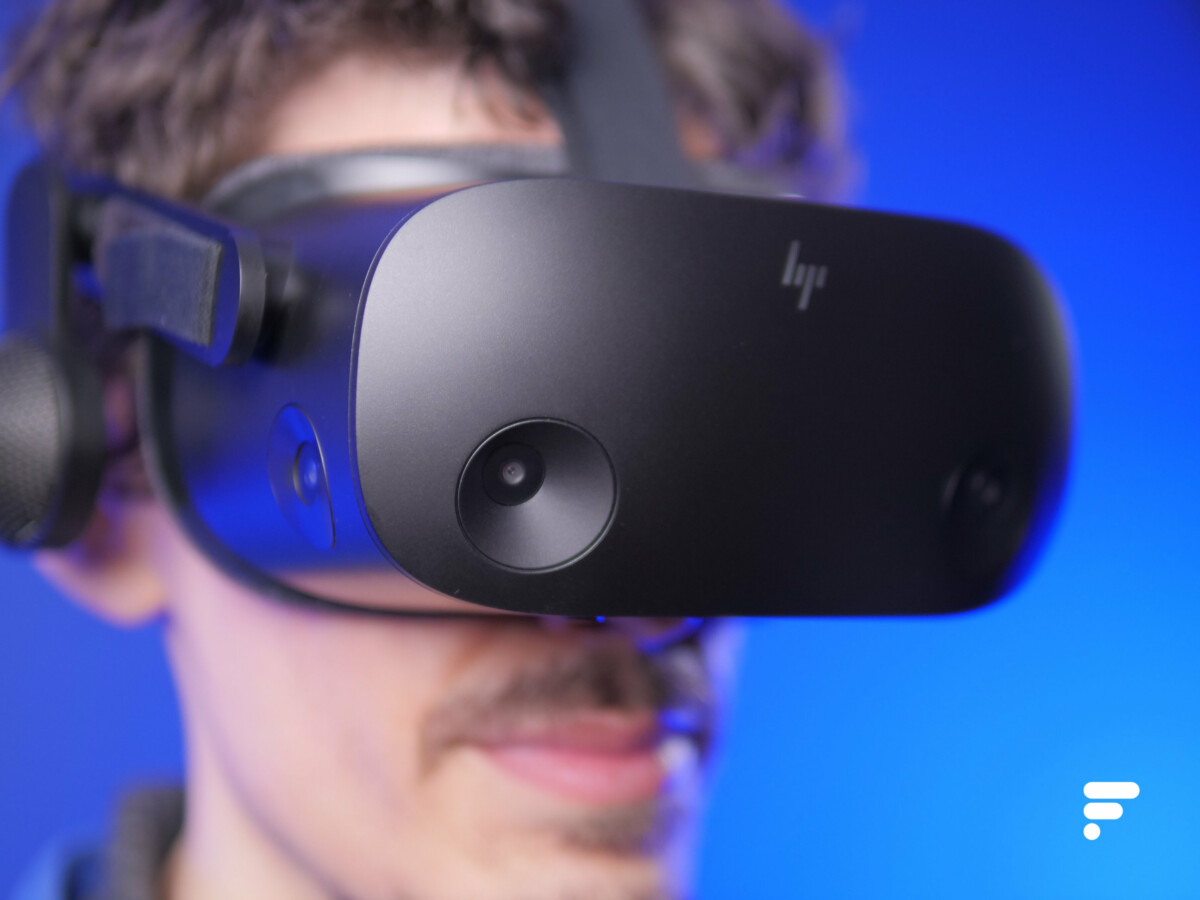 In the small virtual reality market, consumer solutions come down to Oculus with its Oculus Quest 2, HTC’s Vive Cosmos platform, and Microsoft’s Mixed Reality headsets with Windows 10. You also have to rely on the Valve Index and the Steam VR ecosystem which offers interconnections between these three universes. HP offers the Reverb G2 to unite the strengths of Mixed Reality and Steam VR with a headset designed in close collaboration with Valve and Microsoft. Is this high-end product worth the detour? Is there a good alternative to the competition from Oculus and HTC? Let’s see this in detail.

The tested product was loaned by the manufacturer

A helmet that is comfortable to wear, but not autonomous

Let’s start with a defining characteristic of a VR headset, here it is a wired headset. It means several things. First, it is mandatory to have a compatible PC or laptop to operate it, since it is not stand-alone. It also means that you will have to deal with the length of the cable which will necessarily limit the experience a bit depending on where you want to use the device. Finally, it also means that the headset does not necessarily need a battery, or some of the electronics found in a headset like the Quest 2, standalone. We will come back to these points in our test, because they are decisive for certain strengths or weaknesses of the helmet. 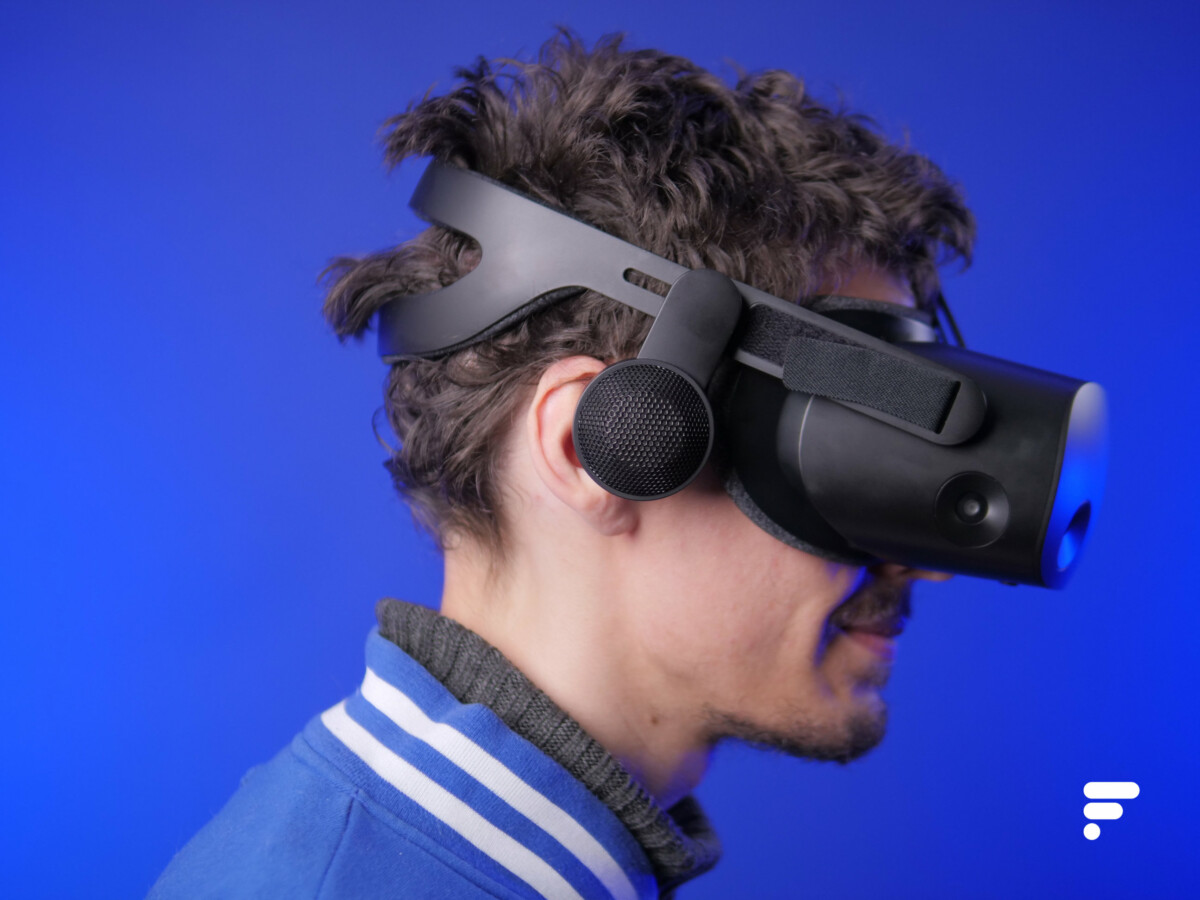 The HP Reverb G2 is presented otherwise as a rather classic VR headset with a large visor on the front which hides the screen and the two lenses, a button for adjusting the interpupillary distance, and a small speaker on each side. The headset still weighs 550 grams, which puts it above a Quest 2, but below a Valve Index. Perhaps this is due to HP’s choices for maximizing comfort.

Because the Reverb G2 is very comfortable to wear. The helmet uses a double hoop system around the back of the head, as if to distribute the weight better, also with a clip that goes over the head. All of these are covered in thick foam that is reminiscent of what can be found on ski goggles. It’s really very comfortable, and you can use the headset for several hours without too much trouble. 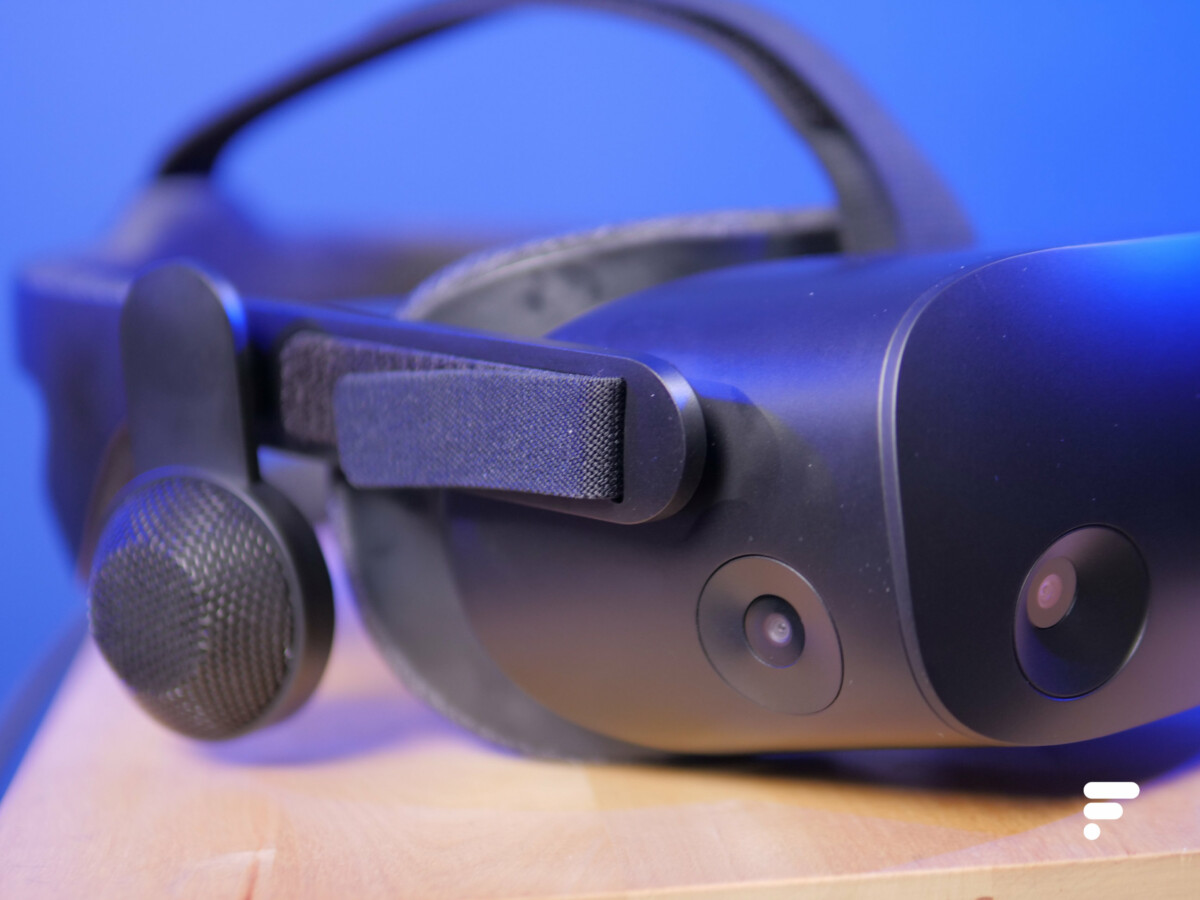 Adjustments are quite easy using two zippers, one on each side, and the hook-and-loop fastener at the top. Not everything is perfect with this helmet, however. First, I couldn’t easily remove the visor without removing the helmet completely. Some competitors now offer to lift the visor to avoid tampering with the settings, while still taking a look at the real environment. 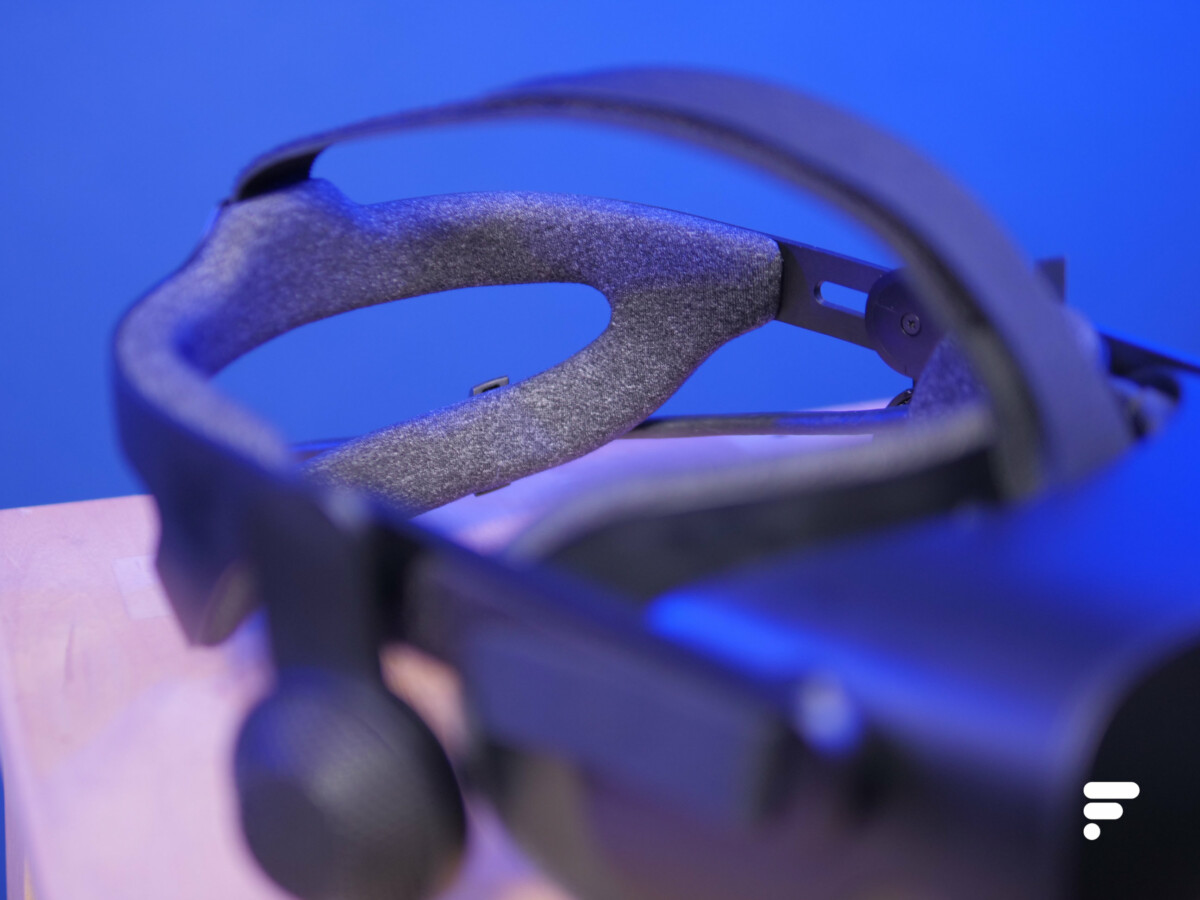 Then, the cable that connects the headphones necessarily passes through the screen on the front. It can be passed through the back of the head through a small plastic hoop that is supposed to hook onto the back of the helmet. I say supposed, because, on my side, this hoop never withstood the tension of the cable, and always ended up falling to the ground at the slightest sudden movement. In the end, I chose to let the cable loose, and run it through my clothes to keep it from bothering me, but that’s not ideal. 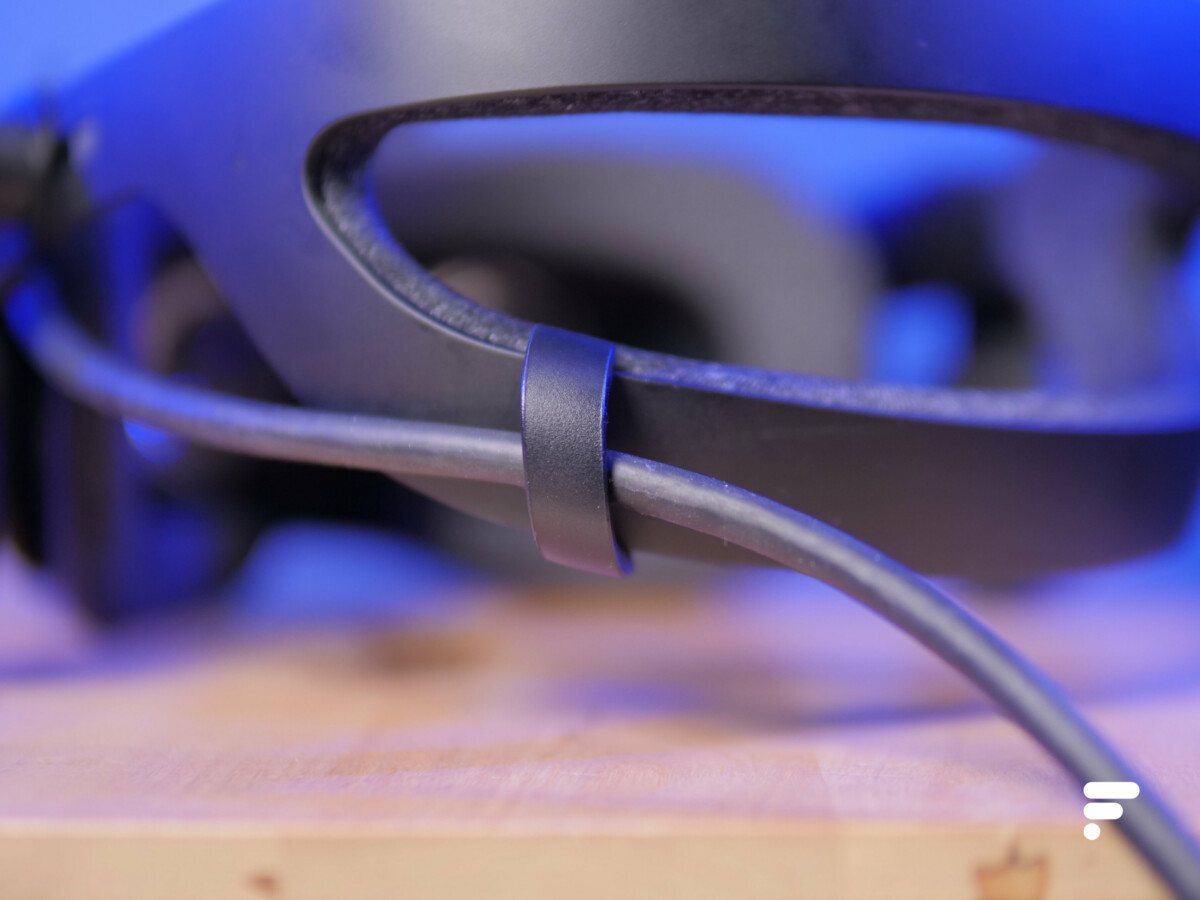 The cable gland always ends up coming off // Source: Frandroid

The cable let’s talk about it. The system proposed by HP is ingenious, but quite classic. To connect to a PC, the headset needs a video signal, through DisplayPort, and data exchange, via USB, in addition to a power supply. To avoid having 30 cables from the headset, HP offers us a small hub from which we will install the supplied power adapter, the DisplayPort cable and the USB-C cable. If you do not have these connections on your PC, HP provides a DisplayPort to miniDisplayPort adapter, for laptops in particular, and USB-C to USB-A, the more traditional format. 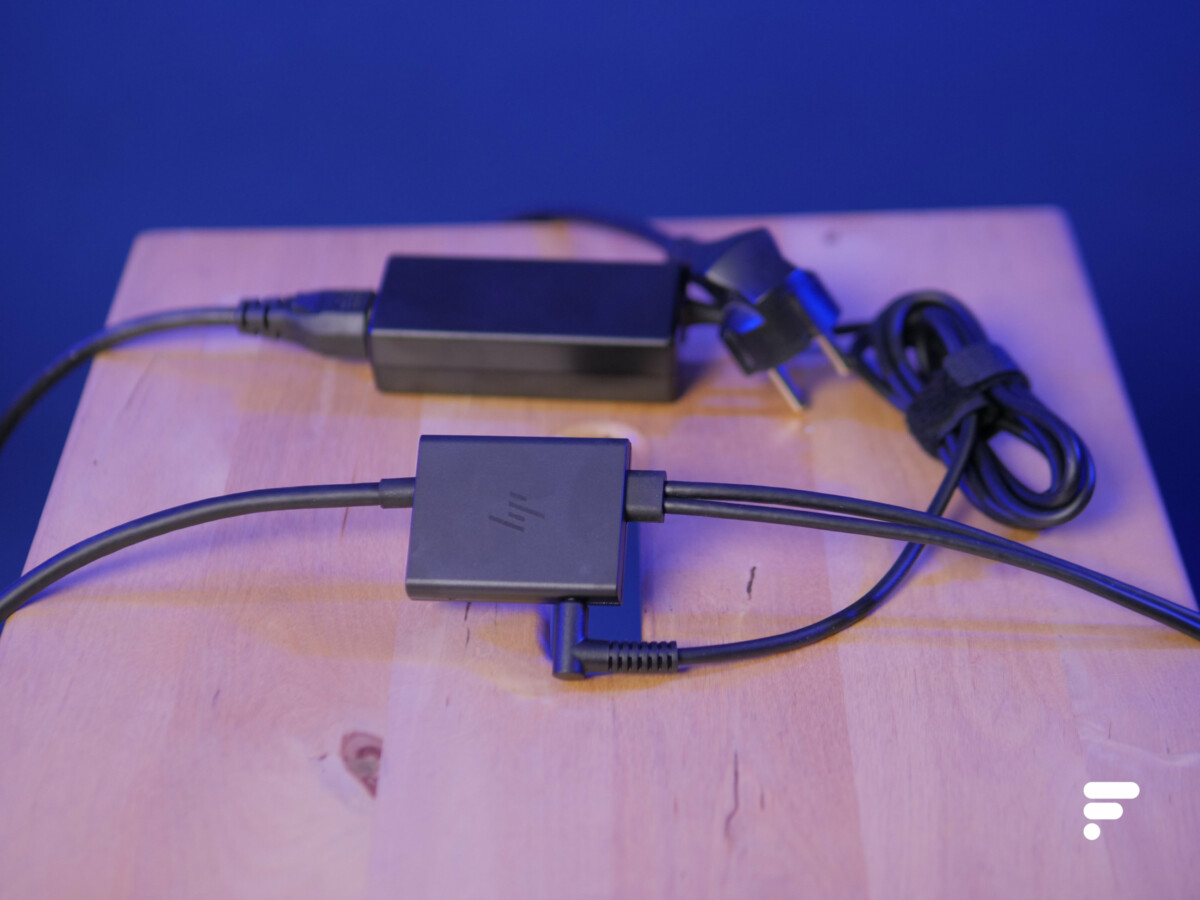 Once this hub is correctly connected, all that remains is to plug it into our headphones. Here we have a 6 meter thick cable which will very simply slip into the helmet. With 6 meters in length, we really have enough to create a beautiful virtual space without getting in the way. 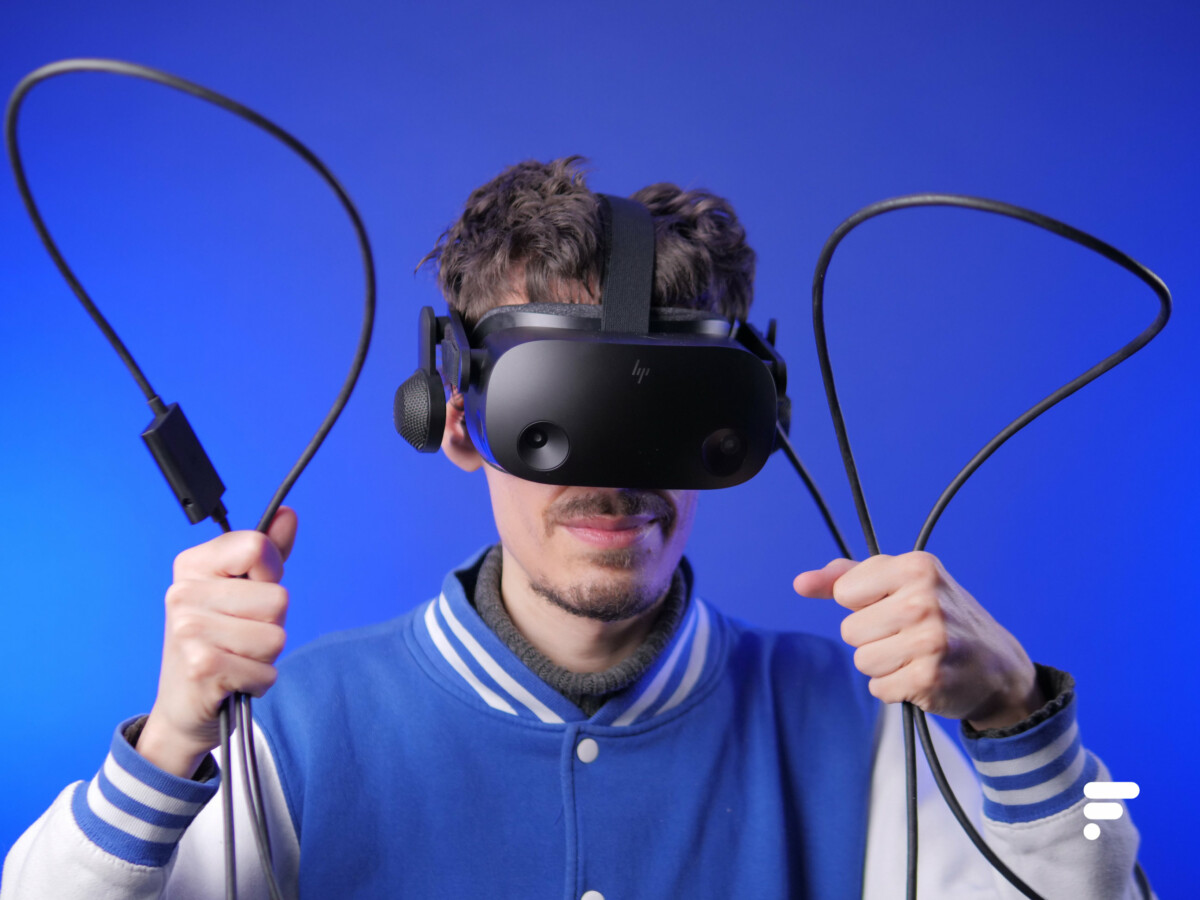 The cable is quite long // Source: Frandroid

Obviously, you still have to take into account that standing, the helmet will be positioned about 2 meters from the ground, depending on your height, which leaves 4 meters of distance between the PC and your position. However, I did not encounter any problem moving around in my virtual space. It all depends on the space in your home for this activity.

The throttles would need more work

Seeing the virtual world is good, interacting with it is better. HP includes in the box two controllers which take a fairly classic design in the field of VR. We have in each hand half of a controller with: an analog stick, four front buttons, two menu buttons, and two triggers. Each controller is topped by a circle surrounded by sensors so that the headset can spot them in space. Each controller requires two AA batteries to operate. 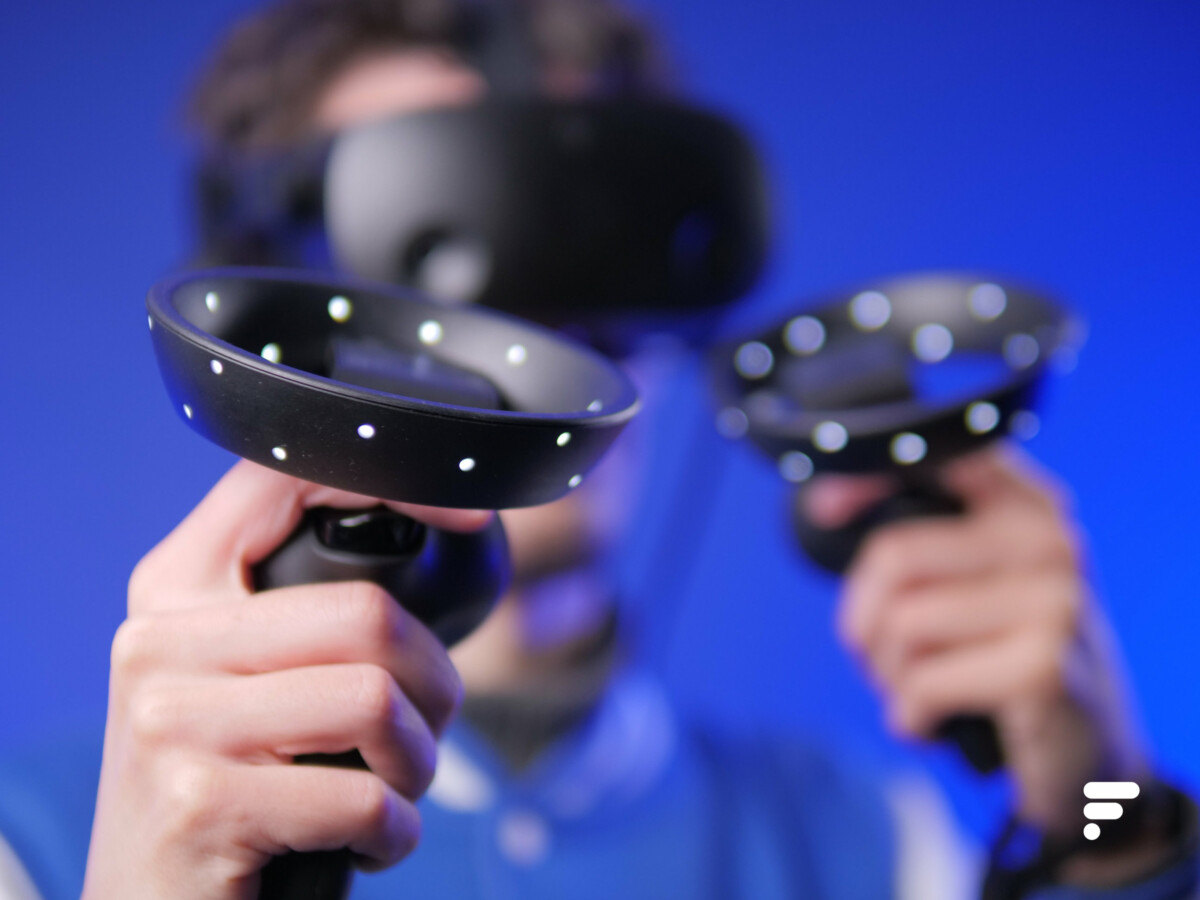 They connect wirelessly directly to the headphones, which is quite convenient. This makes pairing very simple, since you don’t go through a Bluetooth connection menu. Just long press the Windows button to turn them on, and they’ll connect.

These controllers are unfortunately one of the weak points of the Reverb G2. They are quite impressive, compared to the Oculus Touch for example, and it is therefore easy to clash them during a VR experience. There is clearly a miniaturization effort to be made, but HP here is only following Microsoft’s benchmark design for its Mixed Reality platform. We would have liked the collaboration with Valve to include, for example, the use of its Valve Index controllers. 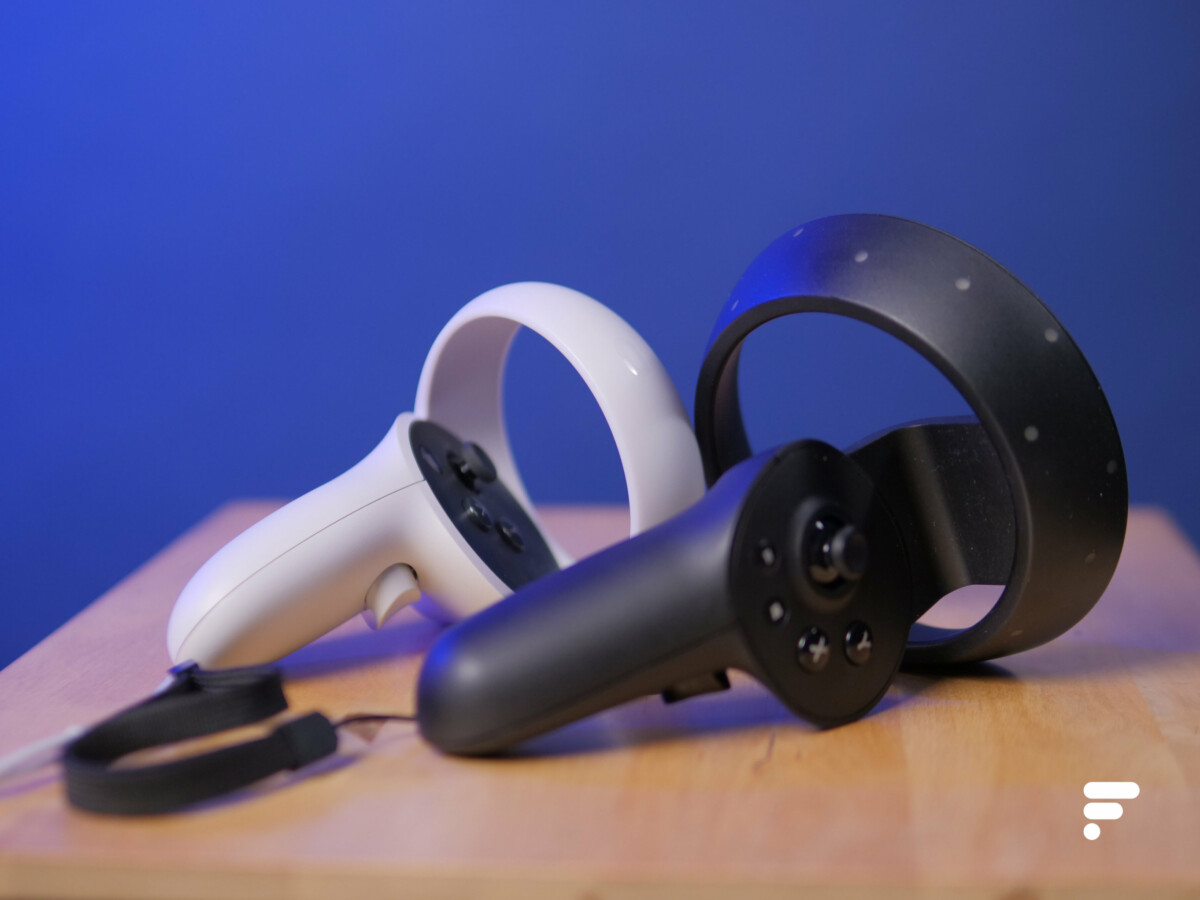 An Oculus Touch controller on the left, and that of the Reverb G2 on the right // Source: Frandroid

The screen is one of the most important components of a VR headset. It is he who will determine the accuracy of the display, as well as the fluidity of the experience. Here, HP spoils us with two 2.98-inch displays with a definition of 2160 x 2160 per eye and a refresh rate of 90 Hz. To top it off, the lenses were designed by Valve to not miss any detail. As soon as we put the helmet in front of our eyes, the obvious is that we have a very high quality display.

I was able to use the headset for several hours to view a virtual desktop and work on this article without any readability issues. Obviously, the writing becomes a bit more blurry in peripheral vision, but you really don’t have any grid pattern appearing in front of your eyes. The very high definition of each screen makes it possible to display text with precision and make it very readable. The 90Hz display frequency is more than enough to provide a great experience, and even turning your head quickly doesn’t push the screen to its limits.

This is definitely the biggest highlight of this VR headset. We are here far beyond what the competition can offer, even the recent Oculus Quest 2.

What is the Windows Mixed Reality experience worth in 2021?

The Reverb G2 is first and foremost a Windows Mixed Reality headset. You must therefore go through Windows 10 to use it, and launch the “mixed reality portal” . If you’ve ever had an Oculus or SteamVR headset on your head, it’s the same kind of experience you get at Microsoft: a virtual apartment you walk around in 3D to start apps. Microsoft obliges, this time it will be Mixed Reality applications for Windows 10 available on the Microsoft Store. 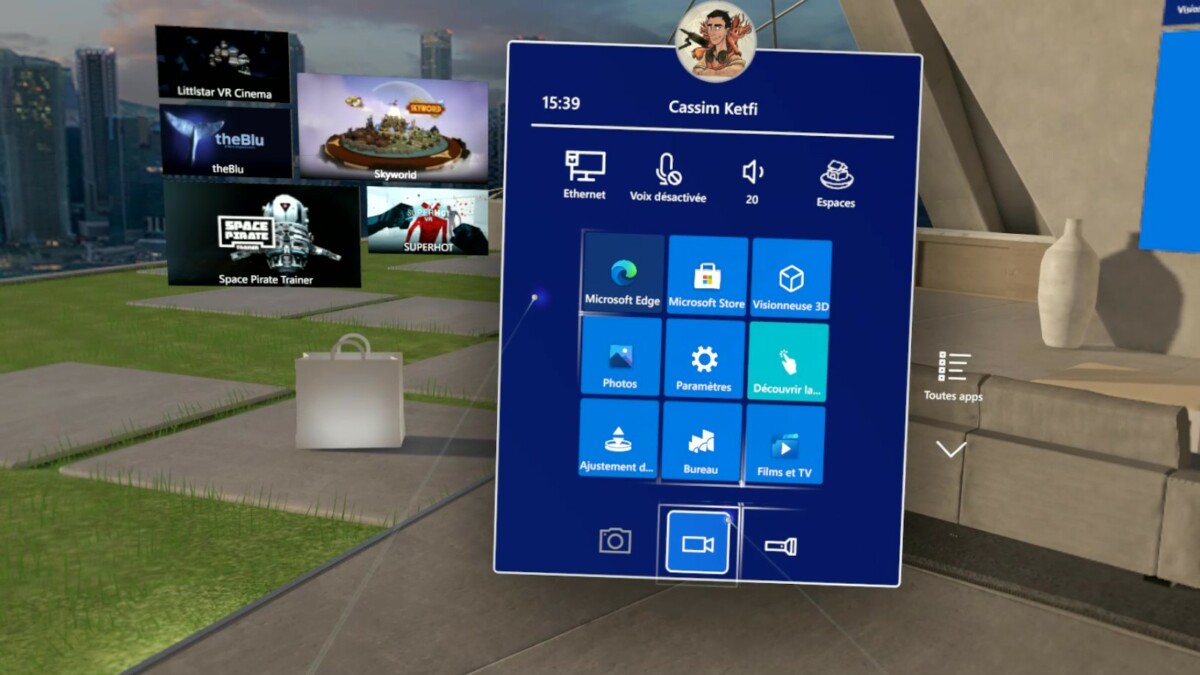 Getting started is quite natural, although we would have liked a more detailed guide to understand the possibilities offered. The system works both in sedentary mode, where you can be seated at your desk, and in “room” mode where you can demarcate your play area. At that point a virtual wall will remind you that you are approaching one of the limits you have defined.

Note that there are two types of applications in this environment. First there are applications designed for VR that offer 360-degree immersion. This is for example the case with games like SuperHot. If an application was not designed for, it is still available, but launches as a virtual 2D window. The point here is to have virtually as many screens as you want. By playing with the perspective of our virtual world, we can even decide to have a movie screen in front of our eyes if we want to. 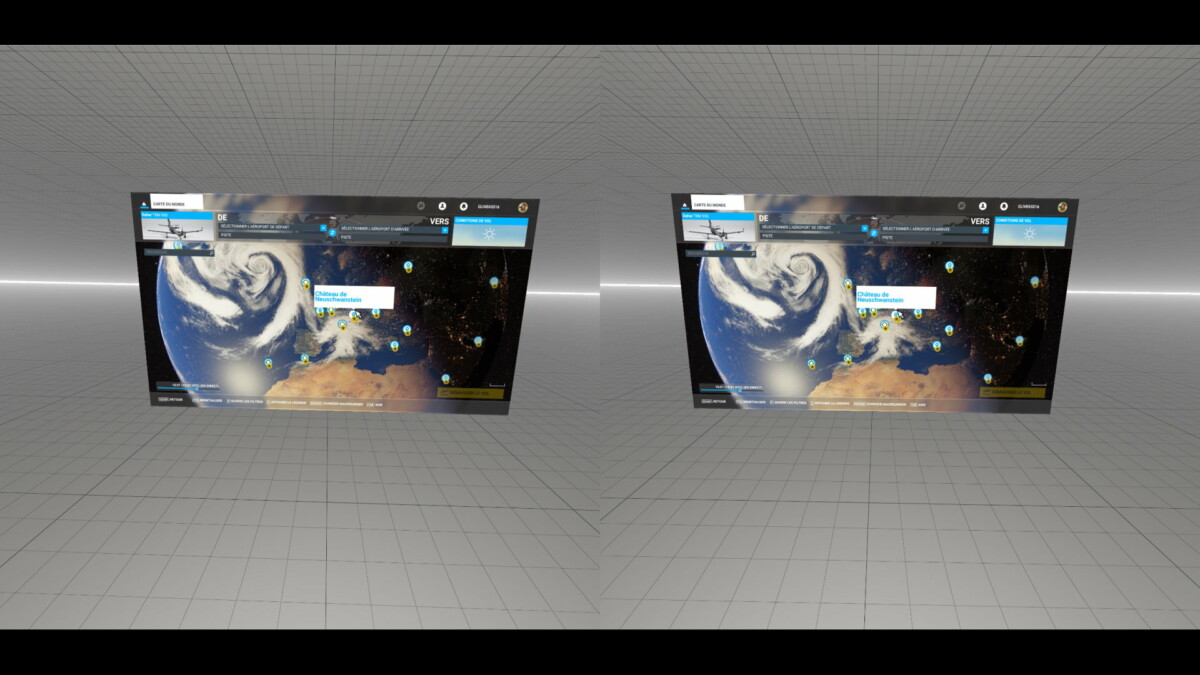 The great VR demo offered by the Windows Mixed Reality platform is Flight Simulator . Since an update, the game has natively integrated VR compatibility with the HP Reverb G2 and the experience is stunning. We find ourselves riveted behind the handle in his cockpit. Obviously, the experience is fully experienced sitting behind a HOTAS or a yoke, but even with a controller it is really very immersive.

The VR experience is gripping

You can fly over Paris in a VR

Difficult to transcribe the pleasure one has in discovering large cities or natural environments from the skies, in virtual reality. I was able to take a few screenshots, but unfortunately that doesn’t pay homage to the immersion. 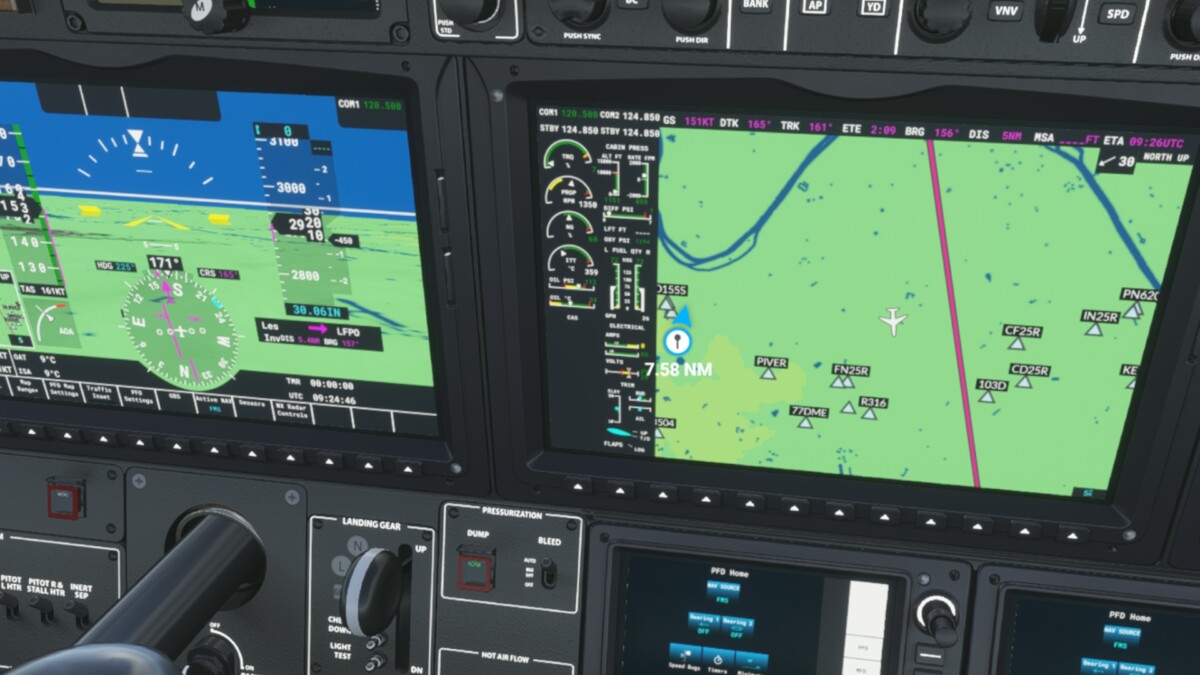 You can read each instrument and actually fly the plane // Source: Frandroid

What is most striking is to discover the attention to detail lent by Asobo to the flight instruments on the plane. Thanks to the excellent readability offered by the Reverb G2, you can easily read the various indications on the instrument panel, the codes given by the airport, or the readings of the various instruments.

Oculus is both the near-creator of the market and one of its leaders. When a competing headset comes out, it is done without the rich ecosystem of the Oculus Store and the developers revolving around it. This is not just a flaw. Oculus owned by Facebook, the brand’s VR headsets must be synchronized with a Facebook account to work. This is not the case at all here.

It will therefore be necessary to ignore the exclusives developed by or for the Oculus Store. Titles like Lone Echo which are of very high quality, but which necessarily require a helmet from this brand.

Fortunately, Microsoft had the good idea to very quickly make its platform compatible with SteamVR, which, as the name suggests, brings together all of Steam’s VR experiences. So we can play games like Half-Life Alyx in VR with just a few clicks, in theory.

In theory, because during my tests I encountered quite a few compatibility issues and you only need to look at the official Steam and Microsoft forums or on Reddit to discover a myriad of problems between Windows MR and Windows headsets. the Steam VR platform. In my case, it was mainly performance issues that made using the VR headset very unpleasant.

The HP Reverb G2 is marketed from 639 euros in France, without the controllers. It takes 769 euros for the pack tested here with the headset and two controllers.