In recent years, the American studio Panic Button has specialized in ports in general, and Switch ports in particular. In the space of just three years, Texans have still adapted DOOM, Wolfenstein II: The New Colossus, Warframe, Subnautica, Hob, Wolfenstein: Youngblood, Doom 3 and Torchlight II for the Nintendo console. In other words, they are starting to know the guts of the machine by heart! And that was necessary to succeed in keeping the fluidity of DOOM Eternal. Even if it’s the graphics that pay the price … 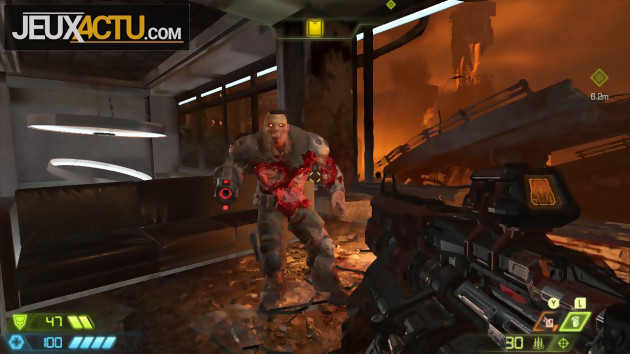 We could start this test by evoking the scenario of DOOM Eternal (ah ah, the good joke!), By recalling its glory kill mechanics, by praising its dynamism, by taking inventory of the arsenal, by cursing against codex and gameplay choppy tutorials, or weighing the pros and cons of sway bars, double jumps and other grappling hooks. But all this is not really the topic of the day. Indeed, the game was released on PC, PS4 and Xbox One already nine months ago and, as a simple port, this Switch version turns out to be perfectly identical to the original experience on all these points. Moreover, we can already regret having to deal with DOOM Eternal “quite simply” and not with an extended version which would include the extension The Ancient Gods: Part One. However, the latter has also already been released on other platforms. Fans of beautiful boxes can also lament the lack of a physical version, the game is only available in dematerialized (at sixty euros, by the way …). This point can also be slightly problematic because you have to download nearly 19 GB of data and have enough space on the console to store them. Knowing that the Switch has an internal storage space of only 32 GB, it will be necessary to archive a bunch of other games. 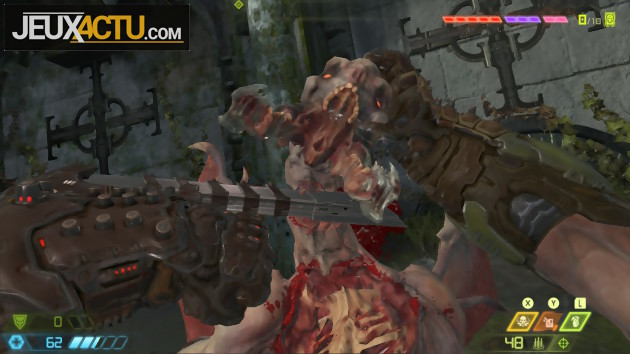 Faithful to his reputation as a big nag, the Doom Guy therefore adopts the philosophy of “push yourself from there that I get started “. Our super soldier also seems to push the console to its limits, because it heats up like never before in television mode. As for playing on a laptop, it doesn’t come smoothly either. The various texts that appear on the screen have not been redone, and they therefore appear much too small. The problem is even more sensitive as regards the representation of the commands. Unless you have lynx eyes, it is almost impossible to distinguish the icon representing the left stick from that of the right stick. We therefore recommend that you skip the entire tutorial sentence in docked mode, even if you plan to play on a laptop afterwards.

HE IS BLURDOOR DOOM, HE IS BLUR

Obviously, being able to play Doom Eternal in bed or in the subway is the main advantage of this Switch version. Players who do not have another console or PC can also fall back on television mode, because the experience remains intact. The game is still just as nervous and brutal, and it enjoys a flawless fluidity. Not that it reaches sixty frames per second (that would be totally illusory) but because the framerate remains permanently stable. Indeed, we are entitled to thirty images per second absolutely constant, which is enough to give a real impression of fluidity. If this choice made by the developers is clearly the one to be adopted, it is not without consideration. Thus, the resolution constantly adapts to the action in order to support the framerate. And it is unfortunately frankly visible. As soon as there are a little too many explosions or that we are in too wide arenas, the graphics start to bathe in a rather unsightly blur. In addition, regardless of the adaptive resolution, we can see that the models and textures have been revised downwards overall. Besides, Panic Button has pushed the optimization to add black bands during the cutscenes, just to have a little less pixels to calculate and display. Let’s be honest and admit that this version of DOOM Eternal is hands down the ugliest it can be. But now, in the heat of the moment, visual weaknesses don’t really matter that much since we focus mainly on the movements and aiming of our hero, fast enough to occupy our attention and prevent us to scrutinize the scenery and details of enemies too much. Let’s end on a positive note: load times are extremely reasonable, which is far from always the case on Nintendo’s machine. 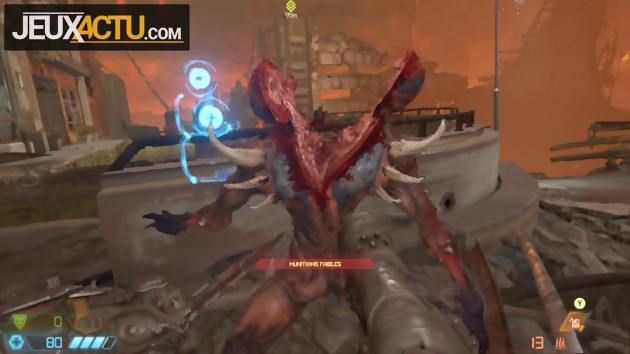