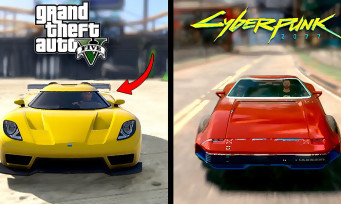 It’s been a long week since Cyberpunk 2077 was released on the market and there’s not a day without the news being devoted to the title of CD Projekt Red. In trending topic rather for its bad buzz than its great qualities which are however numerous, Cyberpunk 2077 is a game which required 8 years of development (as much as a Red Dead Redemption 2) and which will have requested more than 300 million dollars of ‘investment. So of course, the title is already profitable with its 8 million pre-orders, but it is now subject to many discussions, especially concerning the PS4 and Xbox One versions which do not hold up. Often compared as being a GTA in a futuristic fashion, Cyberpunk 2077 takes the codes of course (urban open world, possibility of literally doing grand theft auto, shooting all the time with your weapon) and it was impossible not to compare it to GTA 5, one of the craziest open worlds Rockstar Games has created.

The two games are therefore put side by side in order to observe how our character behaves each in their open world. Shots in car tires, shots in water, smoke effects during tire burnout, behavior of NPCs when threatened in the street, when they are in a car, fire starts in nature, animations underwater, behavior of ragdolls, etc. No matter what the situation is, GTA 5 always does the best, which proves their know-how and the attention to detail in their games. The bosses what.