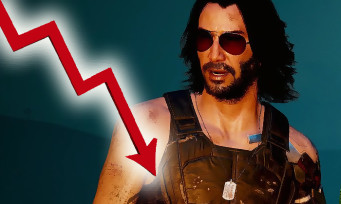 Definitely not a single day goes by without talking about Cyberpunk 2077. While the game has not yet been repaired on PS4 and Xbox One, on the PC user side, the game is not Nor does it seem to captivate the attention of the players either. At least that’s what a graph shared by Githyp tells us, which allows us to see a rather dizzying drop in the number of players since its release on December 10. No less than 79% of players have already deserted the game and according to figures given by Steam, Cyberpunk 2077 today brings together barely more than 225,000 players simultaneously, while at the time of its release there at 3 weeks, we had over a million players.

For some analysts, this drastic drop is intimately linked to games whose content is only solo, since the latter do not offer a Replay Value as important as multi games in general. We can therefore rule on the fact that the players may have already completed the adventure, that others prefer to wait for the arrival of new patches to correct the bugs, even on PC, but one thing is certain, this decrease in popularity had not been so dazzling when The Witcher 3 was released in 2015. To reach the same figure, we had to wait more than 3 months, against 3 weeks for Cyberpunk 2077. Whatever happens, the controversy around the game has necessarily had a negative impact on the title of CD Projekt Red.