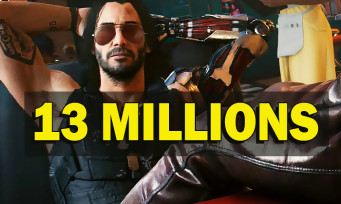 While Cyberpunk 2077 is still at the heart of an unprecedented controversy, and tries hard to get out of this unenviable situation, the management of CD Projekt Red decided that it was time to do update on the game’s sales, 15 days after its release. We already knew that the title had registered no less than 8 million pre-orders, allowing it to be profitable even before its official release (500 million in sales for a production cost of 300 million dollars), but on the date of December 20, 2020, we learn that Cyberpunk 2077 has sold 13 million copies. It is a monster commercial success and it is especially 3 times more than The Witcher 3 which had sold 4 million copies over the same period of exploitation. Proof that the Polish studio has gained popularity and confidence among players who pre-purchased with their eyes closed. No wonder the returns are so scathing since the discovery – almost macabre – of the deceptive and almost unplayable old gen’n versions when they were released on December 10. 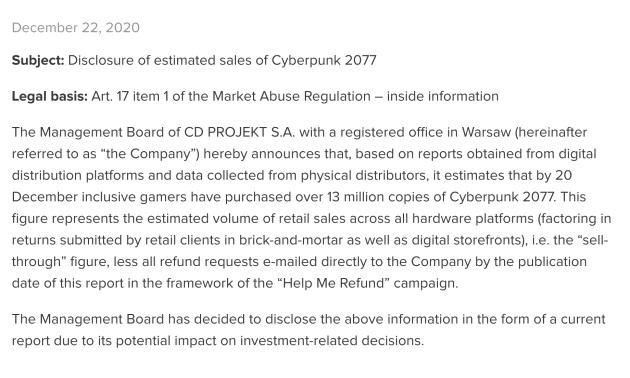 If we go into a little more detail, we learn that in these 13 million copies, it includes both digital sales and physical sales , but also refunds. In the document provided by CD Projekt Red, it is noted that these are refunds sent directly to the Polish studio, and not those claimed on PlayStation Store or Xbox Live. It will therefore be interesting to know the true value, and the figures concerning these reimbursements from dissatisfied players. We already knew that 51% of pre-sales had been made on PC, against 49% on home consoles, which proves to what extent CD Projekt Red is a studio assimilated to the culture of games on PC.