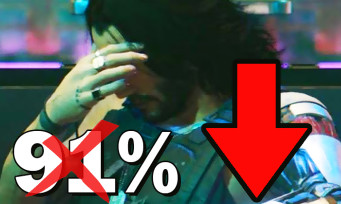 Frankly, who would have believed? Who could have imagined such a scenario for the release of Cyberpunk 2077? Dedicated to being erected as the greatest game of 2020, as the one that would end the year on hats, the title of Cyberpunk 2077 is ultimately one of the greatest video game disasters in history. In memory, no game has had such a stormy or even catastrophic launch. What is criticized above all against the Polish studio, is to have knowingly hidden the old gen PS4 and Xbox One versions from players and the press, forcing tests to be done only on the PC version. Sacrificed versions, riddled with bugs and which made it possible to pass the quality control of Sony and Microsoft nevertheless. Result, a ruined gaming experience, the game withdrawn from PlayStation Store, the obligation to reimburse dissatisfied players, all also sprinkled by a marketing campaign a little too sure of itself, arrogant limit at times.

We remind you that when the embargo on the tests was lifted on Monday, December 7, 2020, Cyberpunk 2077 inherited a nice 91% on Metacritic, an exceptional average that made it one of the top rated games of the year. Tests carried out only on PC, with a high-end config imposed by CD Projet Red, in order to ensure good grades and thus recover all the bonuses linked to the Metascore. While the PC version was not free of bugs, they weren’t as dramatic as those seen on PS4 and Xbox One, which obviously didn’t stop journalists from appreciating the game at its fair value (it is a good game, let’s remember it anyway). But since December 7, 2020, other reviews on PC have fallen and some media have obviously not had the same experience (or leniency it is depending), preferring to sanction the game because of its many technical concerns. The arrival of the Guardian, GamesBeat and Quarter to Three ratings therefore got the better of the 91% that is no longer. Today, as of this writing, Cyberpunk 2077’s average rating is 87%. He therefore lost the “Must-Play” badge. 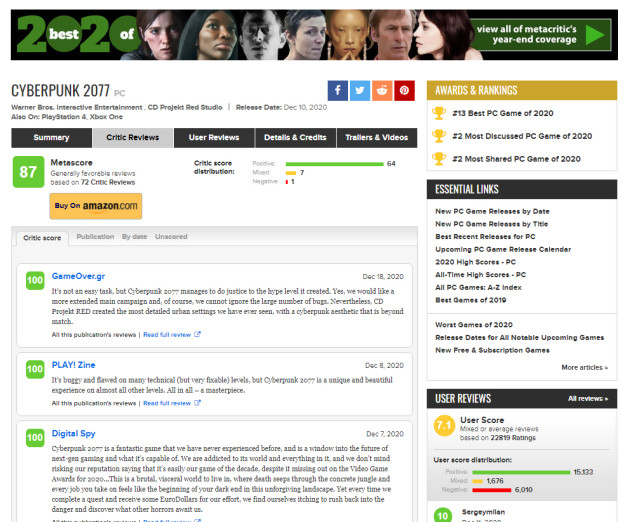