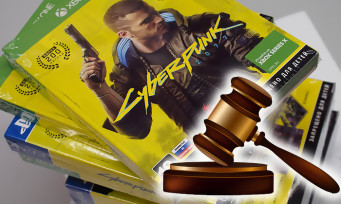 What appeared to be a simple threat at the beginning of the week has just been carried out by the Rosen law firm, which has indeed filed a class-action with the against CD Projekt Red on behalf of Polish investors . The studio that developed Cyberpunk 2077 is accused of having lied about the quality of the PS4 and Xbox One versions and therefore of having been the subject of “false and misleading statements, but also of having concealed important information throughout the recourse period (January 16 to December 17, 2020) with a view to obtaining financial benefits. ” The lawsuit also accuses the studio of knowingly concealing that “Cyberpunk 2077 was virtually unplayable on current generation Xbox or PlayStation systems due to a significant number of bugs” , if one relies on the exact terms that were used for filing the complaint.

But this case could take on another dimension since the Rosen law firm invites other investors who wish to join the class-action to do so before February 22, 2021 using the following form . Worse, we learned from analyst Daniel Ahmad that Rosen law firm is only one of four firms intending to bring a similar action against CD Projekt Red, even if the result should lead to a single consolidated action and not several which are carried out at the same time according to the tweet of the lawyer Richard Hoeg.

The argument being that the company mislead investors in a deceptive way about the quality of the game on last gen consoles, which led to recent negative impact, at the expense of the investing public https://t.co/cT3YSUKamy

While accurate, the number of lawsuits here likely doesn’t make a material difference. Multiple firms will seek to try to certify an affected class while positioning themselves with the strongest lead plaintiff. There will likely only be one consolidated action at end of day. https://t.co/qudD6TYhnq

Recall that to date, 13 million copies (including 8 pre-orders) of Cyberpunk 2077 have been sold, that the game is already profitable (the production cost more than 300 million dollars), that the studio knew perfectly well that the state of the game on old gen ‘consoles was deplorable, but that the studio was still updating it, while Marcin Iwiński, co-founder of CD Projekt Red, had assured investors that there was “no problem” with the PS4 and Xbox One versions of the game when it was last reported. Cyberpunk 2077 is still withdrawn from PlayStation Store at the moment and two big patches should arrive by the end of the year and during the month of January 2021. What a story!