Skip to content
It was this Saturday, January 16, 2021 in the morning when Jason Shreier published his behind-the-scenes investigation into the development of Cyberpunk 2077 , which has been the subject of much controversy since its release on December 10, 2020 following its release. chaotic launch. An article against the management of CD Projekt Red, which is based on twenty testimonies from people working or still working in the Polish studio. Most have requested anonymity to avoid reprisals, others like Adrian Jakubiak, former audio programmer on the game (and who left CD Projekt Red) are speaking openly. This investigation, which was the fruit of several weeks of work on the part of the Bloomberg journalist, has for the moment no official response from CD Projekt Red, but Adam Badowski, the studio director, has allowed himself to respond to Jason Shreier on Twitter in order to provide his version on certain subjects. 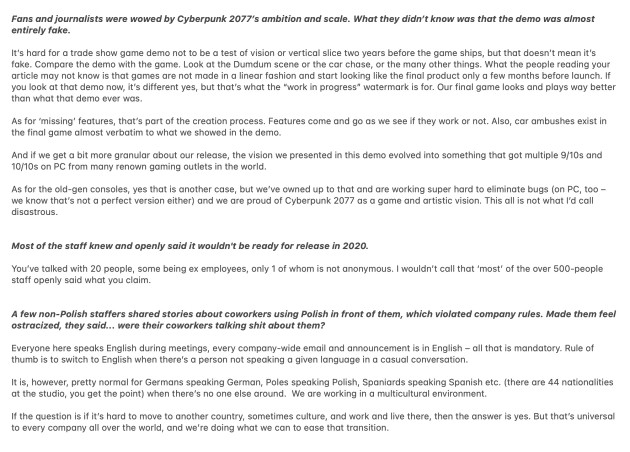 He returns in particular to the statements which call into question the demo of E3 2018, “distorted” according to Jason Shreier’s words, since the game had not yet been clearly defined, that some announced features had not been planned, such as unscripted car ambushes and the ability to climb walls with Mantis Blades , which then promised a certain verticality in the game and level design. For the developers interviewed, this demo was a waste of time and this work of several months could have been used on the game itself. In defense of the game and the studio, Adam Badowski explains that just because the demo is a representation of a developer’s desired vision doesn’t mean it is necessarily wrong. The latter employs the notion of vertical slice, which is a kind of demo mockup that is designed especially for special events. Adam Badowski asks players to compare the demo and the final result so that we can see that the two versions are equal today. Certainly there are differences, but this is also the reason why the mention “Work in progress” on the video is useful. For Adam Badowski, the sequence in question of the retail version makes it better than the demo of E3 2018.

Regarding the missing or promised features, the director of CD Projekt Red specifies that it’s part of the creation process, that things are taken out sometimes if that doesn’t work. We obviously think of climbing on the walls with the Mantis Blades. He recalls that car ambushes exist in the final version of Cyberpunk 2077 and that there is even no loading time compared to the demo shown 2 years ago in Los Angeles. Adam Badowski recalls that the game received excellent ratings in its PC version from many media around the world. On the other hand, as regards the console versions, he would like to remind that the team assumes full responsibility and that it works to correct all the bugs, while specifying that he also knows that the PC version is far from perfect. But for him, nothing is ultimately disastrous to the point of making it a matter of state.

Adam Badowski does not scramble and also takes the opportunity to come back to the fact that the leaders were aware of the technical issues and bugs related to PS4 and Xbox One versions of Cyberpunk 2077, and that the game would never be ready for 2020. Certainly, Jason Shreier was able to chat with about twenty employees, knowing that only one had the courage to speak with his face uncovered, but that 20 people do not represent a whole team. He recalls that the development of Cyberpunk 2077 required hiring 500 people. Finally, the studio director also returns to the part of Jason Shreier’s investigation concerning the sidelining of certain employees who violated certain rules, in particular requiring the staff to speak English systematically for good understanding within from the studio. He reminds us that CD Projekt Red is a studio which brings together no less than 44 nationalities, that it is normal that the Germans speak German among themselves, that the Poles speak Polish together or that the Spaniards also communicate in their native language, but that when global meetings and emailing, obviously English is required.

An exchange of tweets between Adam Badowski and Jason Shreier allowed us to understand that the studio was aware of this investigation since the studio was approached by the Bloomberg reporter, and would have refused to answer certain questions . This is the reason why Shreier is amazed that a speech is unexpectedly made on Twitter. We imagine that CD Projekt Red is preparing a right of reply and we will obviously echo this other story to better understand this case.