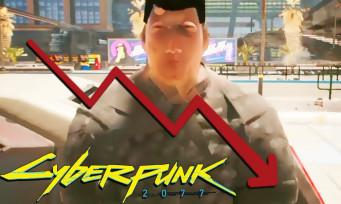 The CD Projekt Red crews must have woken up with quite a headache this morning. While the studio boasted yesterday of having registered 8 million pre-orders, which has generated almost $ 500,000 million in sales, we learn at the moment that the financial markets were more worried versions for PS4 and Xbox One consoles. It is true that since the official release of the game, it is finally possible to discover what the title really looks like, and the result is edifying. Not only is the game riddled with disturbing bugs, but Cyberpunk 2077 no longer really looks like the demos we were shown several years ago at shows such as E3. 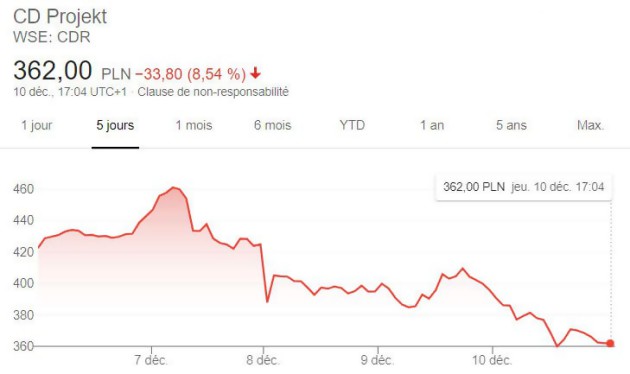 Result: a violent plunge on the stock market by the price of CD Projekt Red, since the latter fell by 8.54%, which is equivalent to a r market cap has shrunk to just under $ 1 billion. If the game is therefore a commercial success at launch, the developers of CD Projekt Red probably did not expect a backfire as violent as this one. Word of mouth is negative, people have called to cancel their pre-orders, while refund requests multiply on the Internet. Cédric Lagarrigue, founder and former boss of the French publisher Focus Home Interactive, recently explained that the pressure was undoubtedly very strong, since the stock market valued the CD Projekt studio no less than 200 times its profits, which is just colossal. Certain that the studio will recoup its costs with Cyberpunk 2077, Cédric Lagarrigue had probably not anticipated the bad buzz that would result from his old gen console versions either.

According to the Polish bank, the production of Cyberpunk 2077 would have cost the tidy sum of $ 328 million (which includes both development and marketing expenses) according to the Polish bank BOS. For its part, the Polish studio continues to communicate on certain figures, in particular that the game has generated 50 million dollars only on Steam in the last two weeks, with 80% of the revenues going directly into the pocket of CD Projekt Red.

Cyberpunk 2077 already exceeded million in revenues on the Steam platform over 2 weeks ago 👌 pic.twitter.com/JkDDMJdp83

We also learn that of the 8 million pre-orders, 59% were made on PC, while the remaining 41% are shared on consoles, knowing that 74% of sales were made in digital versus 26% for the versions physical. We imagine that the health crisis has played on the distribution of these figures. We also remind you that a few months ago, thanks to the Netflix series, CD Projekt’s revenues had increased significantly since the studio had recorded no less than 521 million zlotys of turnover, equivalent to 121 million euros. A record for the Polish firm.