On the occasion of a brief appearance in France, a few weeks after its revelation and before its official launch in France, we were able to take charge of the new GT 100 % electric of the firm to the rings. The opportunity to see that it is a little different from the Porsche Taycan, its technical cousin. 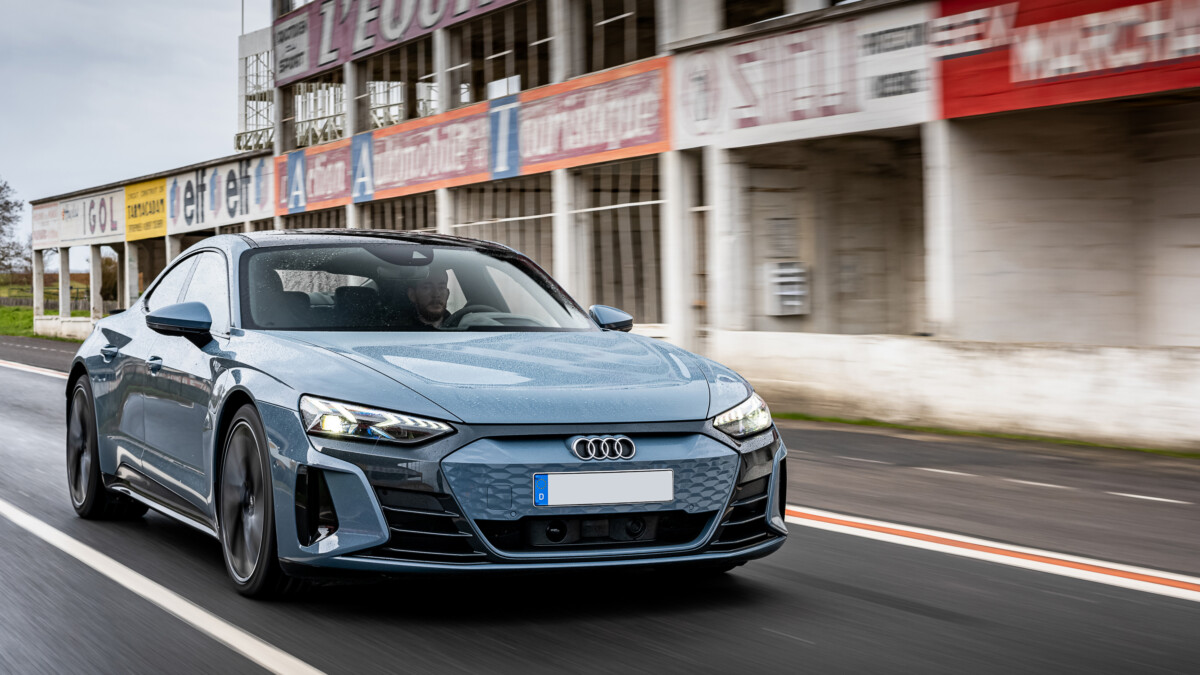 The Audi e-tron GT quattro immortalized in front of the pits of the old circuit of Reims-Gueux // Source: Marius Hanin for Frandroid

To absorb the still fairly high costs of batteries and all the technologies needed to manufacture an electric car, manufacturers, especially premium ones, are leveling up by offering their first electric cars in high-end versions. It is also a way of erecting them as standard bearers of an energy which is tending to democratize within the automotive industry, unless the situation turns around.

Audi already has a 100% electric model in its catalog, namely a high-end SUV called “e-tron” . The e-tron GT is the brand’s second electric model and stems from the eponymous concept car presented two years ago at the Los Angeles Auto Show. And good news, the production version takes almost the same lines as the concept , for a rather spectacular final rendering. If, aesthetically, the affiliation with the Porsche Taycan is not obvious, technically, it concerns, with a few details, the same two cars. And yet, engineers have managed to give them a slightly different character . 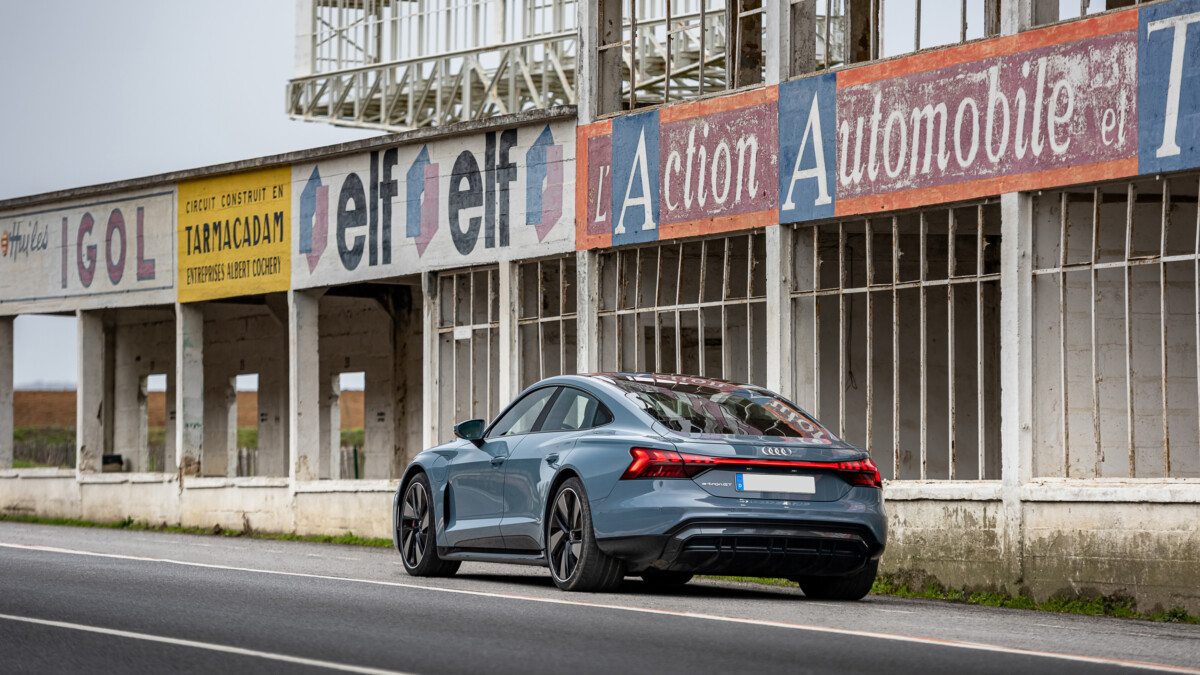 The Audi e-tron GT quattro immortalized in front of the pits of the old circuit of Reims-Gueux // Source: Marius Hanin for Frandroid

A very particular appetite for technology

Inside and out, almost everything sets the Audi e-tron GT apart from the Porsche Taycan. If the interior of the Taycan is intended to be more refined, in particular thanks to the presence of three screens (or even four if you select the appropriate option adding a screen at the level of the dashboard, in front of the passenger seat), the cabin of the Audi e-tron GT has “only” two screens and a few physical controls. A way to hammer home the hierarchy between the two products: the Porsche being the most upscale model, the Audi being slightly below.

But very slightly, because even with one less screen and more physical controls, the ergonomics of the Audi appealed to us more than that of the Porsche . Aircraft cockpit-style shortened keys are a great addition to the central touchscreen. A screen with neat graphics and perfect ergonomics, as usual with Audi. It brings together the entire infotainment system and controls relating to the use and energy of the car. Of course, the infotainment system is compatible with Apple CarPlay and Android Auto .

The interior of the ‘Audi e-tron GT quattro // Source: Marius Hanin for Frandroid

A fairly relative sense of welcome

On board, for a car almost five meters long, we expected better. Sure enough, electric cars aren’t really famous for their spaciousness, but within the Audi e-tron GT, a family-oriented sedan, there are a few shortcomings. On the driver and passenger side, it already feels a bit too crowded, with a center console placed quite high compared to what we are used to handling.

At the back, things get worse, with very narrow seats and a door threshold that will force any human being over six feet to contort themselves. Headroom is barely adequate for an adult, and knee room is moderately acceptable for such a large car. Regarding the trunk, the trunk offers a capacity of 405 liters , which is roughly what a compact thermal offers on the market. The advantage of the Audi e-tron GT is the presence of a second 81-liter trunk at the front that can accommodate one or two small soft bags for the weekend.

The Audi e-tron GT in a few figures

The Audi e-tron GT quattro has two electric motors; one attached to the front axle and the other to the rear axle, allowing the German to be a four-wheel drive. It develops 476 horsepower and 630 Nm of torque , but a Boost function with Launch Control allows to reach 530 horsepower . The 0 to 100 km / h is shot in 4.1 seconds and the maximum speed is 245 km / h . An RS version also exists and develops 598 horsepower (650 horsepower with Overboost) and 830 Nm of torque. The performance is noticeably better with a 0 to 100 km / h in 3.3 seconds and a top speed of 250 km / h.

The powertrain is the same as in a Porsche Taycan, only the power management is changed . The Audi e-tron GT has a two-speed transmission, allowing it to have power all the time, even at shameful speeds. These two speeds are based on three drive shafts, while the rear axle also has a controllable differential lock.

Regarding recharging, Audi announces a change from 5 to 80% in 22.5 minutes with the maximum charging power being established at 270 kW . To achieve such a level of power, it will be necessary to go to a terminal of the Ionity network, of which Audi is part of the consortium. Charging is charged at € 0.31 / min when you take the e-tron Charging Service, a service that provides access to most of the charging stations in Europe. The different rates for this service can be viewed here .

This man is trying to be funny // Source: Marius Hanin for Frandroid

Unfortunately, our grip was far too short to drain the battery and test charging. In two hours, including a good hour for photos, we focused more on driving impressions. It will take about nine hours on an 11 kW AC outlet to go from 0 to 100% and about 30 hours on a traditional outlet.

On the battery side, we have an 800 volt system , not 400, which allows for a more consistent distribution of performance. The battery contains 33 modules, themselves composed of 12 cells, or 396 cells in total, with a total capacity reaching 93.4 kWh (of which 86 kWh useful). Each module has an internal control unit to manage voltage and temperature. This is integrated into the cooling circuit via a heat pump, the battery can thus be cooled or heated in order to be perpetually in an appropriate temperature window.

With all of this, we almost forgot to tell you about autonomy. For our GT quattro version, it is 488 kilometers in WLTP mixed use (472 kilometers for the RS version). Autonomy that we have not been able to verify frankly, as stated above, because of the length of time we have taken over. For information only, over the fifty kilometers carried out on the secondary network, we noted an average of 25.5 kWh / 100 kilometers. A figure that can certainly be greatly improved by adopting a smoother ride.

In a pure GT spirit

As its name suggests, this Audi e-tron GT is a GT (for Grand Touring). Therefore, in the automotive world, this translates into dynamic performance of the first order, while maintaining a level of comfort and respectable roominess. In other words, a GT, is the contradictory alliance between sportiness and comfort .

And from the first turns of the wheel, the Audi e-tron GT lives up to our expectations, less dynamic than a Porsche Taycan, of course, but also more comfortable. This translates, even in “Sport” mode, by softer suspensions, a less incisive and less consistent direction, and quite astonishing speed starts, but in no case violent. Quite the opposite of a Taycan in short .

The Audi e-tron GT is more docile and perhaps more usable in everyday life compared to the Taycan, the prime mover. The ironic part of all of this is that our Audi is also more fun in dynamic driving compared to its cousin from Stuttgart. When the Porsche is absolutely riveted to the ground and where only the laws of physics seem to be able to stop the ardor of its driver, the Audi e-tron was particularly playful on the still wet roads of Champagne-Ardenne [ 19459015], where we picked up the car.

The Audi is less incisive from the front end, but more readily embarks from the rear end, enough to be vigilant on not quite dry asphalt. The e-quattro all-wheel drive allows up to 100% torque distribution to the rear axle only, which also greatly facilitates that little oversteer side. The tires are not entirely foreign to this behavior either, the Goodyear Eagles F1 which fit our test model lack grip in the wet in dynamic driving. 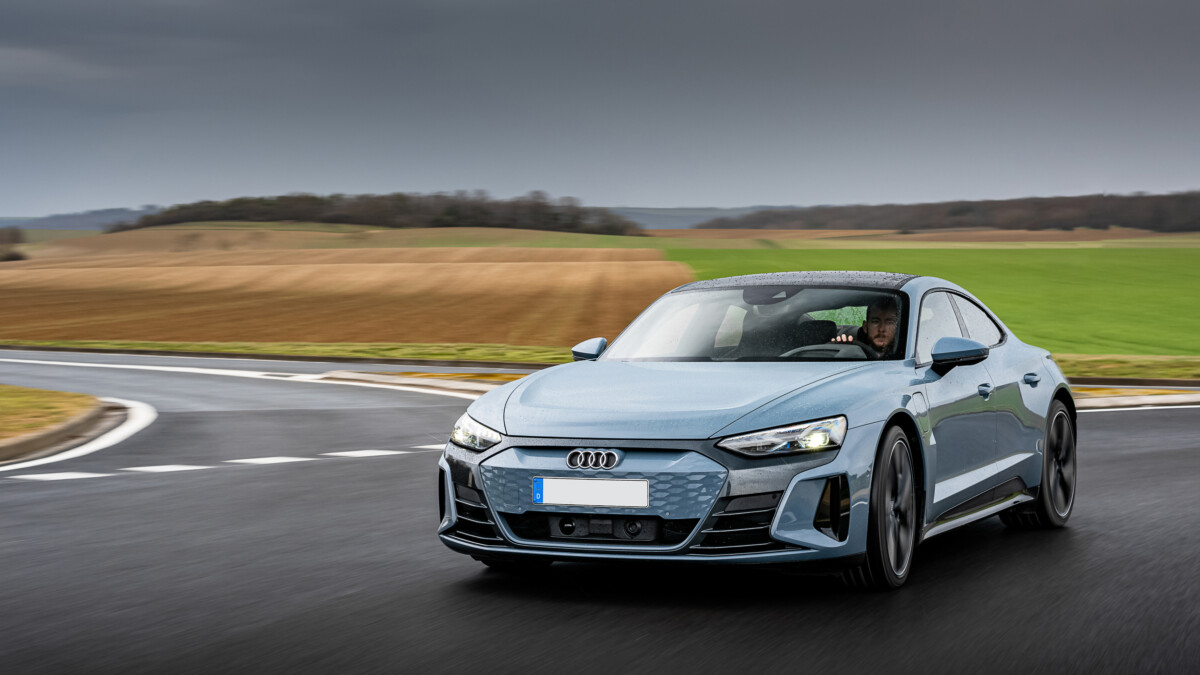 Then there is another phenomenon to take into account with this type of car, and inertia . And despite all the technological paraphernalia that equips our Audi (rear wheels, piloted “Sport” differential at the rear…), the 2290 empty kilos of our test model are not to be neglected. , especially during braking phases. And it is in terms of braking that the Audi e-tron GT sins the most in our eyes. Our test version was fitted with the standard 360-millimeter-diameter steel front brakes and six pistons, a system that was slightly undersized in our view for such a heavy car.

Audi offers, as an option (4150 euros), intermediate brakes between ceramics (optional at 10,500 euros) and steels. These brakes are made of steel with a tungsten carbide coating. They are 415 millimeters in diameter at the front and consist of ten pistons. Braking is often the weak point of electric sports cars, and not only because of the weight. Engineers must also manage the transition from regenerative braking to friction braking .

Its operation is particular since, when the brake pedal is pressed, the friction braking system is only requested beyond a deceleration greater than 0.39 G . Thus, at the start of the pedal, not much happens, regenerative braking acting first. When reaching halfway, the hydraulic braking kicks in and clamps the discs. In our view, it lacks a bit of progressiveness to be completely optimal.

On board the Audi e-tron GT quattro // Source: Marius Hanin

On board the Audi e-tron GT quattro // Source: Marius Hanin

On board the Audi e-tron GT quattro // Source : Marius Hanin

The painful woman has never lived up to her name

In France, the Audi e-tron GT starts from 101,500 euros . Later, like the Taycan , a rear-wheel drive version will “soften” the bill and place this model under 100,000 euros. However, as usual with Audi, the list of options is as long as the arm, and even for a model over 100,000 euros, there is still some equipment to add. We are thinking in particular of the “Dynamic Pack” (5,400 euros) of our test version with the quattro differential on the rear axle, the rear-steered wheels and the adaptive air suspensions.

In the end, the model shown in the photo claims around 140,000 euros (do not discount any ecological bonus on this type of car), ie the same price as the Audi RS e-tron GT, the sportier version and equivalent to a Porsche Taycan Turbo. The Audi e-tron GT is manufactured at the Böllinger Höfe plant in Neckarsulm, Germany, alongside an iconic sports car also flanked by the four rings, namely the Audi R8 and its V10 5, 2 atmospheric liters. The brand expects to deliver around 300 units of its e-tron GT in the first year in France. The first deliveries will begin next April.