Asus returns with its strange concept of a two-screen laptop. In this configuration, we are entitled to the most powerful mobile graphics card of the moment associated with one of the mobile CPUs which has nothing to envy to the CPUs dedicated to stationary PCs. The set is branded by the ROG Zephyrus brand for a laptop PC intended for gamers but also for creative people. 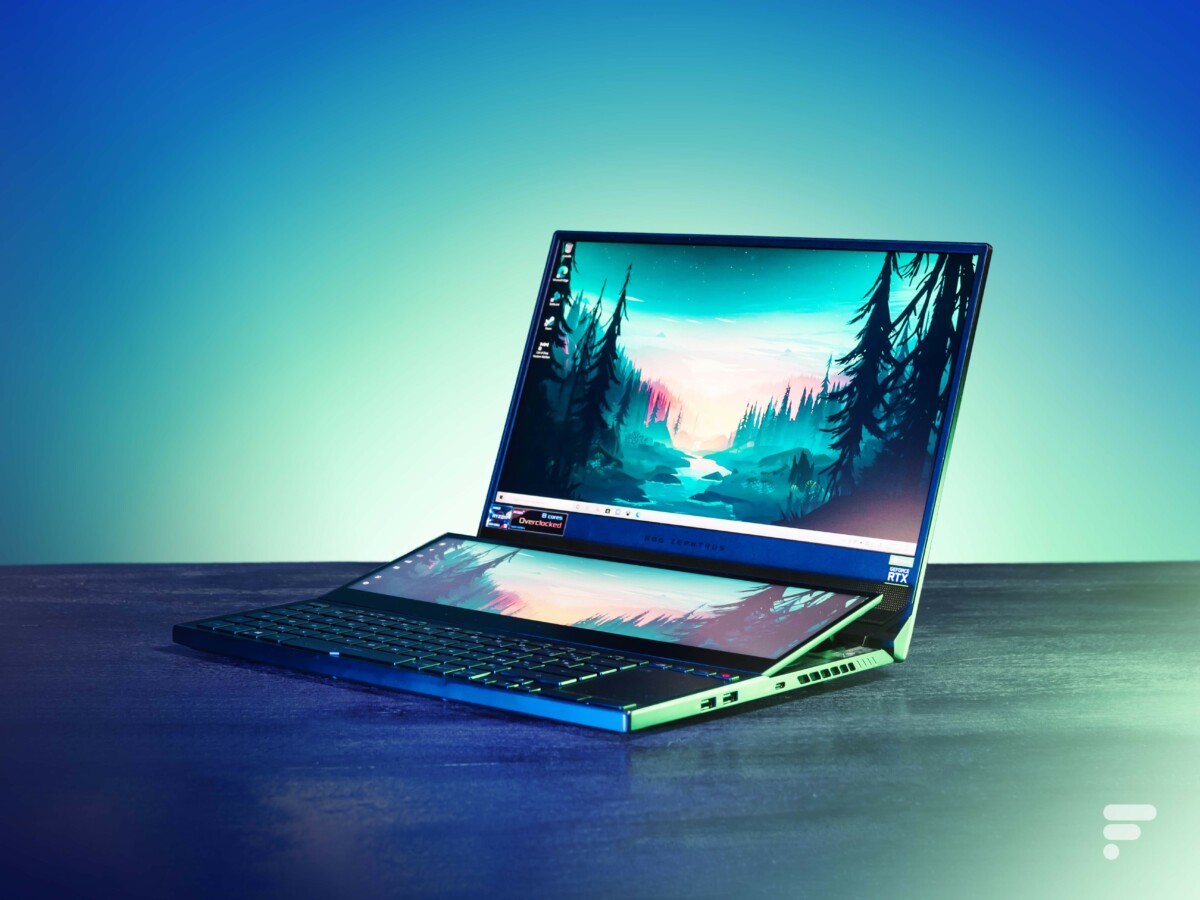 Most of the time, if you read a review of a dual-screen laptop computer, you’re probably going to be interested … in both screens. There have been many previous Asus Duo models, the ZenBook Duo and the ZenBook Pro Duo . This one does not play in the same category as the other two laptops. We’re talking about a laptop PC equipped with the most powerful mobile CPU around and the most powerful mobile graphics chip around. After the 2020 version , here is the 2021 version: the Asus Zephyrus Duo 15 SE (GX551).

Here are the important characteristics of the model we tested:

The tested unit was loaned to us by Asus

If you’ve read our review of the Zephyrus Duo 15 (GX550) , know that both laptops share the same design. It’s hard to tell the difference between the two when their hood is closed. Fortunately, Asus had the good idea to change the colors: the SE is black, not gray, with a dotted pattern on the top.

Switching to a darker finish while adding small patterns for a bit of contrast definitely amplifies the machine’s appeal, although I’m pretty sure some would prefer the more understated design of the predecessor. In any case, we appreciate the absence of multicolored LEDs in all directions. 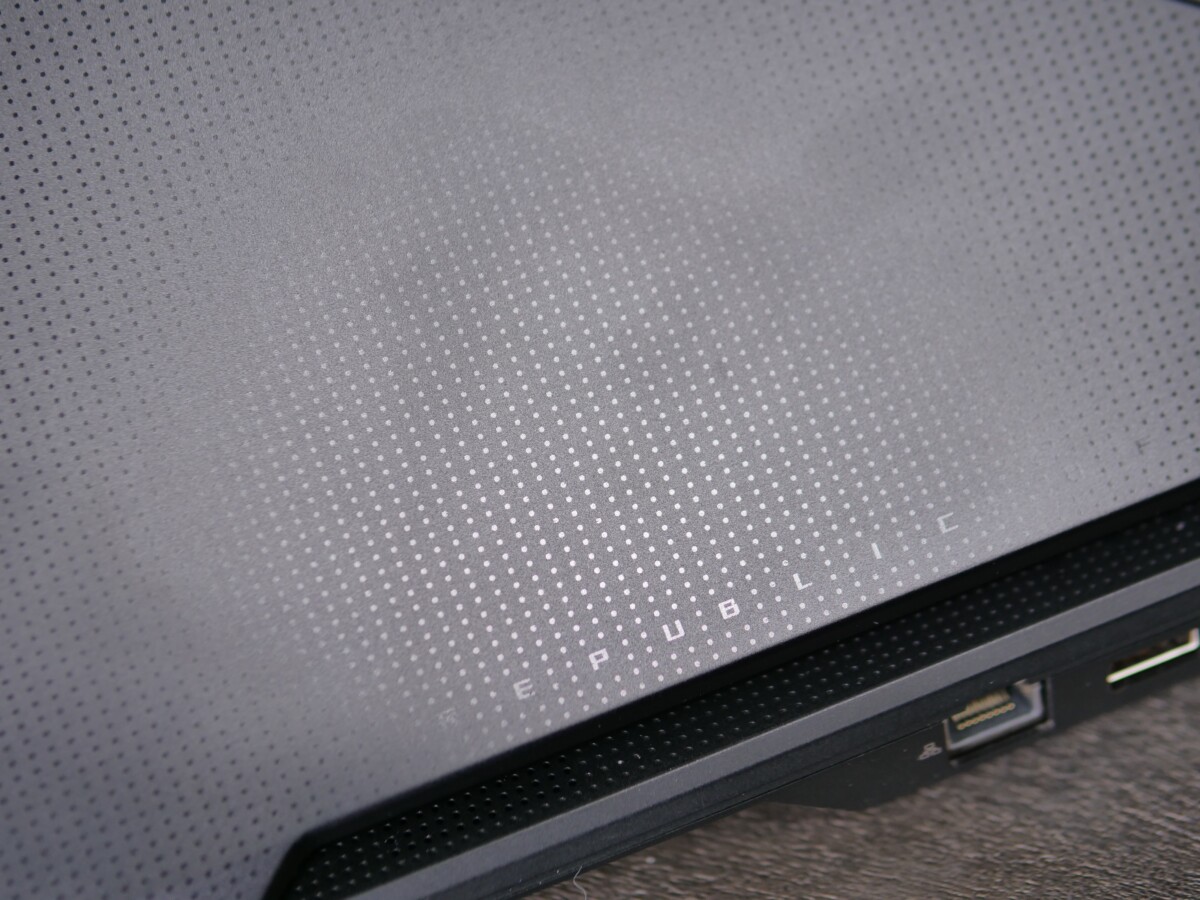 Here is the new rendering with the dot pattern

Once opened, little change at first glance. Except… for the AMD Ryzen logo which takes the place of the Intel Core i9 logo. The keyboard is lowered toward the bottom edge to accommodate the ScreenPad Plus. The secondary display tilts upward, like its predecessor. There is always a gap between the primary display and the secondary display, unlike the Asus ZenBook Duo 14. 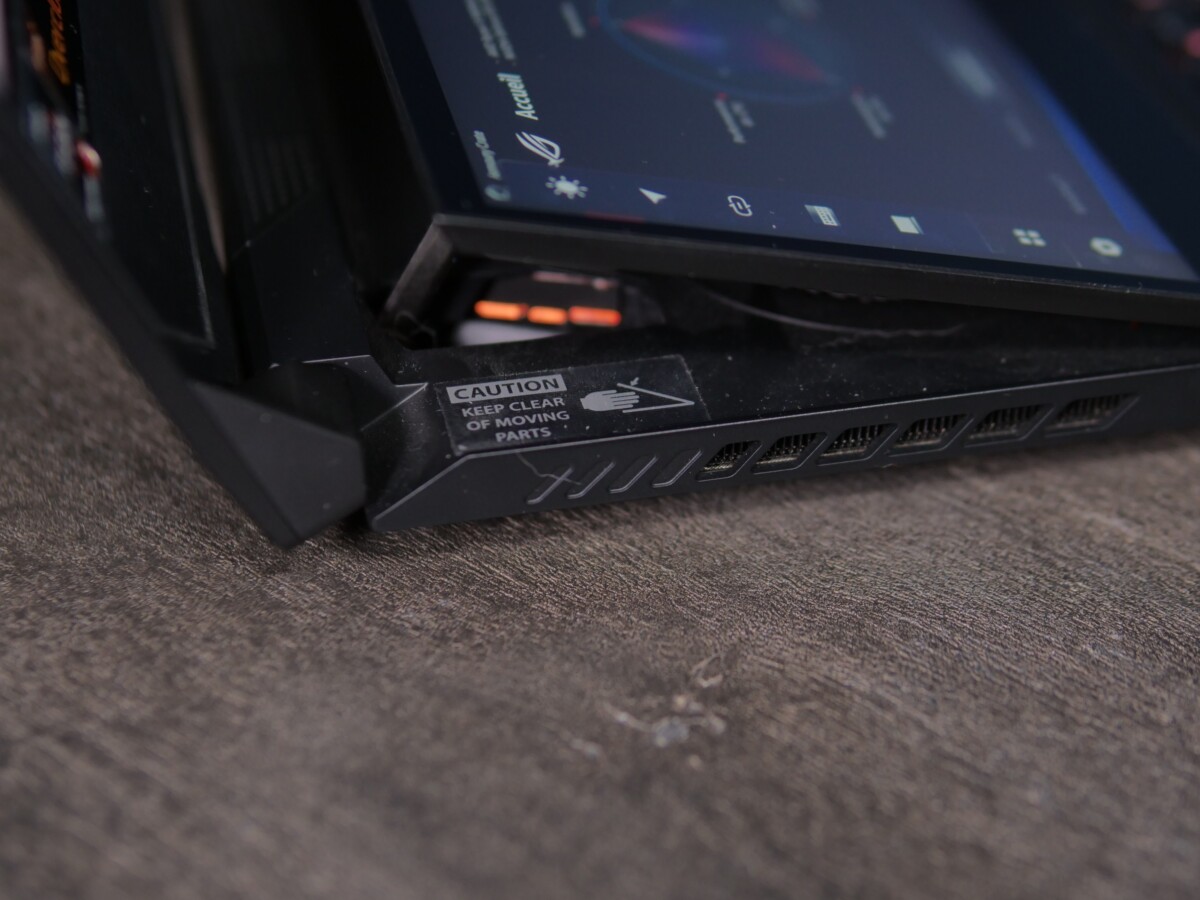 The hinge is unique and very ingenious

As mentioned in the test of the Zephyrus Duo 15 , this second screen continues to offer a unique experience. As a reminder, it is a 14.1-inch diagonal IPS LCD screen with 3840 x 1100 pixel definition to accompany the 15.6-inch main screen in 4K definition. It is designed to provide an extension of the main screen. You can therefore place your windows, tools … or one of the programs that has been specially designed for this screen. It is a real pleasure to use it, you get used to it very quickly especially if you are used to working with several screens. 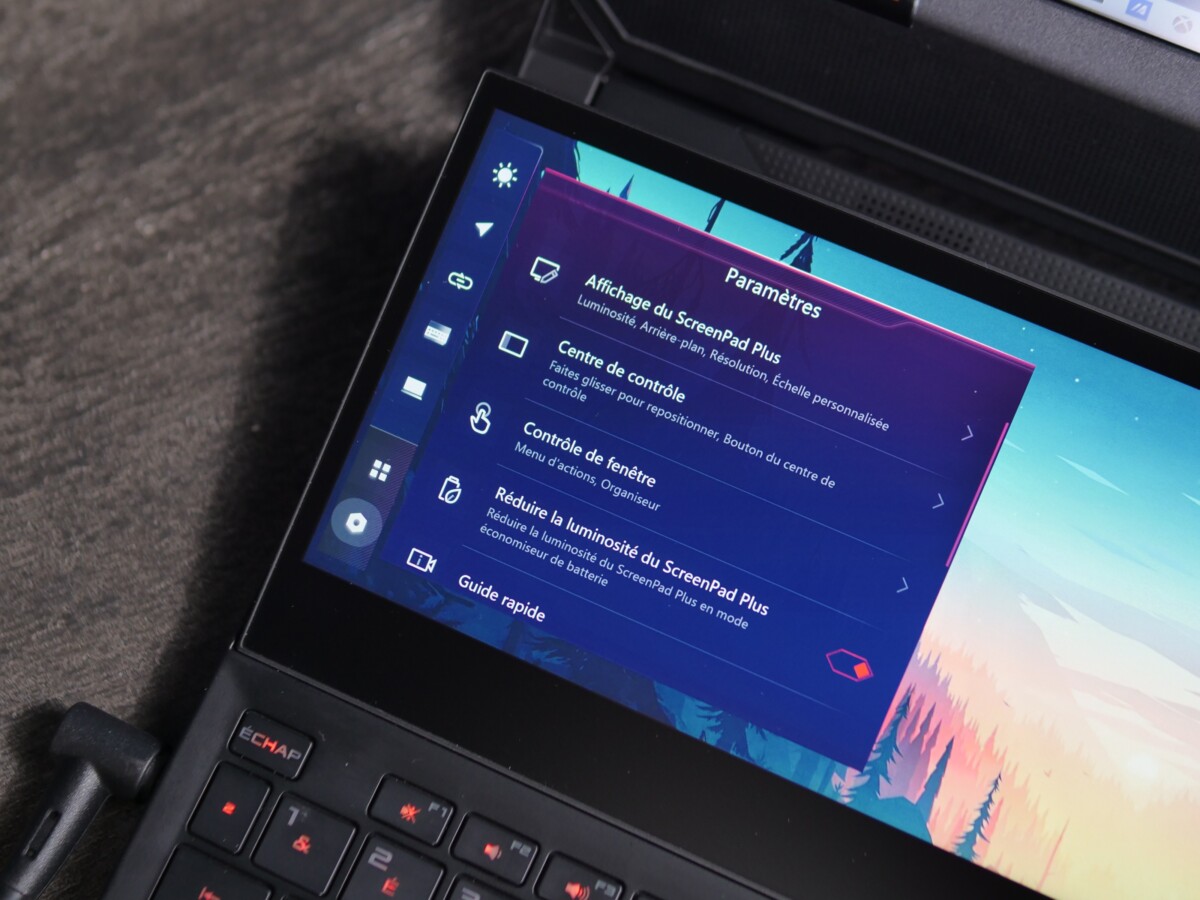 As you can see, the keyboard is therefore moved forward to make room for the ScreenPad. The secondary screen opens about 3 centimeters for better visibility but also to improve ventilation of the chassis. No change concerning the keyboard, nor its lighting and even less of the touchpad which accompanies it to its right (which can display a virtual numeric keypad). 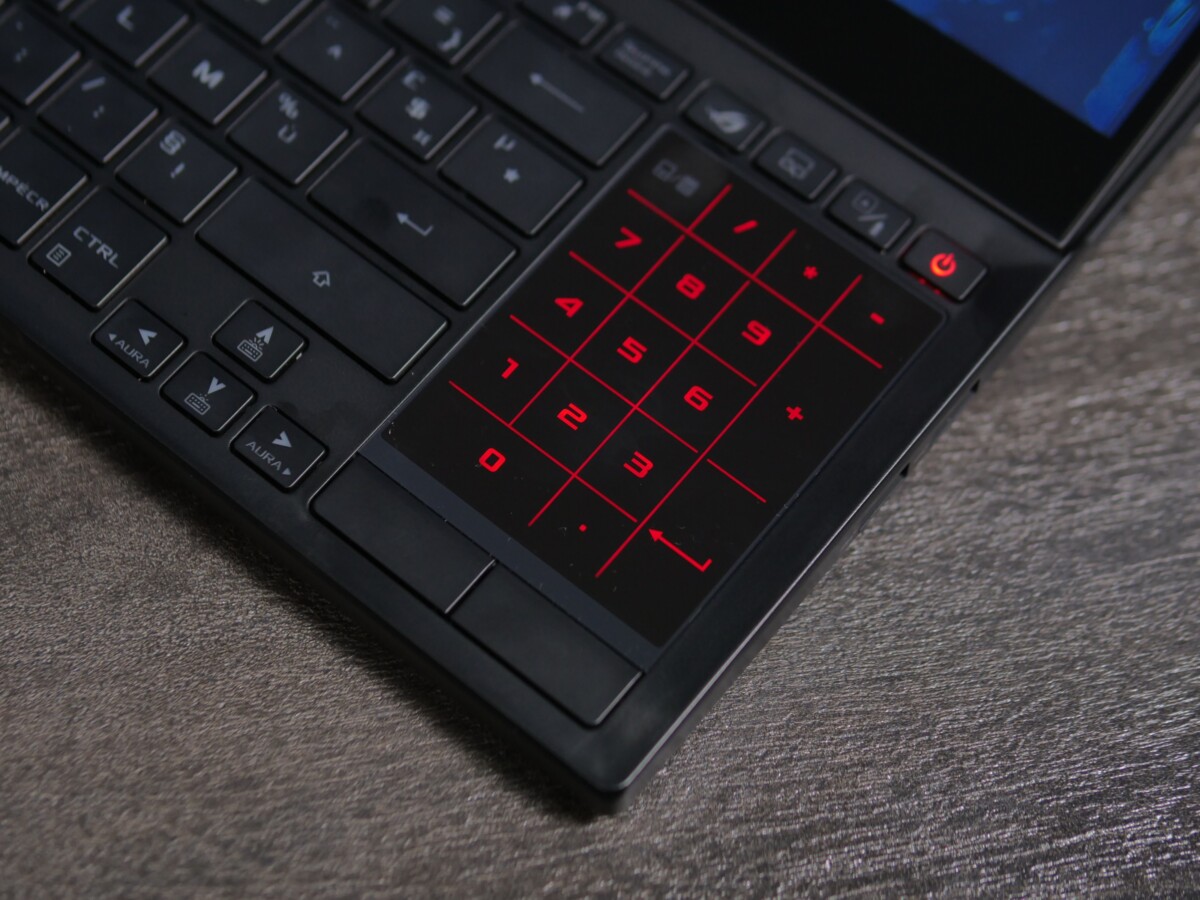 The digital pad is highlighted on the touch pad

The ScreenPad now has a new, much more responsive interface. Touch seems to respond a lot faster, getting closer to what you can get on a smartphone or iPad. There is, however, a matte coating which limits fingerprints but gives a grainy appearance.

Regarding the main screen, there is a change. This 4K IPS LCD display is now able to display a refresh rate of up to 120 Hz , compared to 60 Hz on the older model. That’s a feat in itself, and you’ll find he’s armed to take advantage of this ability. You also always have the option of opting for the Full HD @ 300 Hz display, however we haven’t had the opportunity to test this version.

This 4K display does not come with a webcam and it is not tactile. It is a matte coated screen which still offers a good level of color rendering. It is pre-calibrated, with good viewing angles, good brightness, no annoying light leaks…. It is a screen suitable for gaming and this is reflected in several aspects such as its response time among the best in the category.

There are two new speakers, for a total of 4, the new ones are above the second screen. These are tweeters, their job is to take care of the low frequencies with the bigger speakers underneath doing the heavy lifting. The sound is still so clear, powerful and balanced. We noticed that the metallic rendering that bothered us on the previous model was less present on this model.

One of the strongest criticisms I have to make against this product about its ergonomics is a point that I did not address on the previous model, it is the location of the power outlet. Located on the left side of the laptop, it will annoy left-handed people using a mouse, but it will also annoy right-handed people using the keyboard. Certainly the chassis design involved some compromises … it’s a shame. 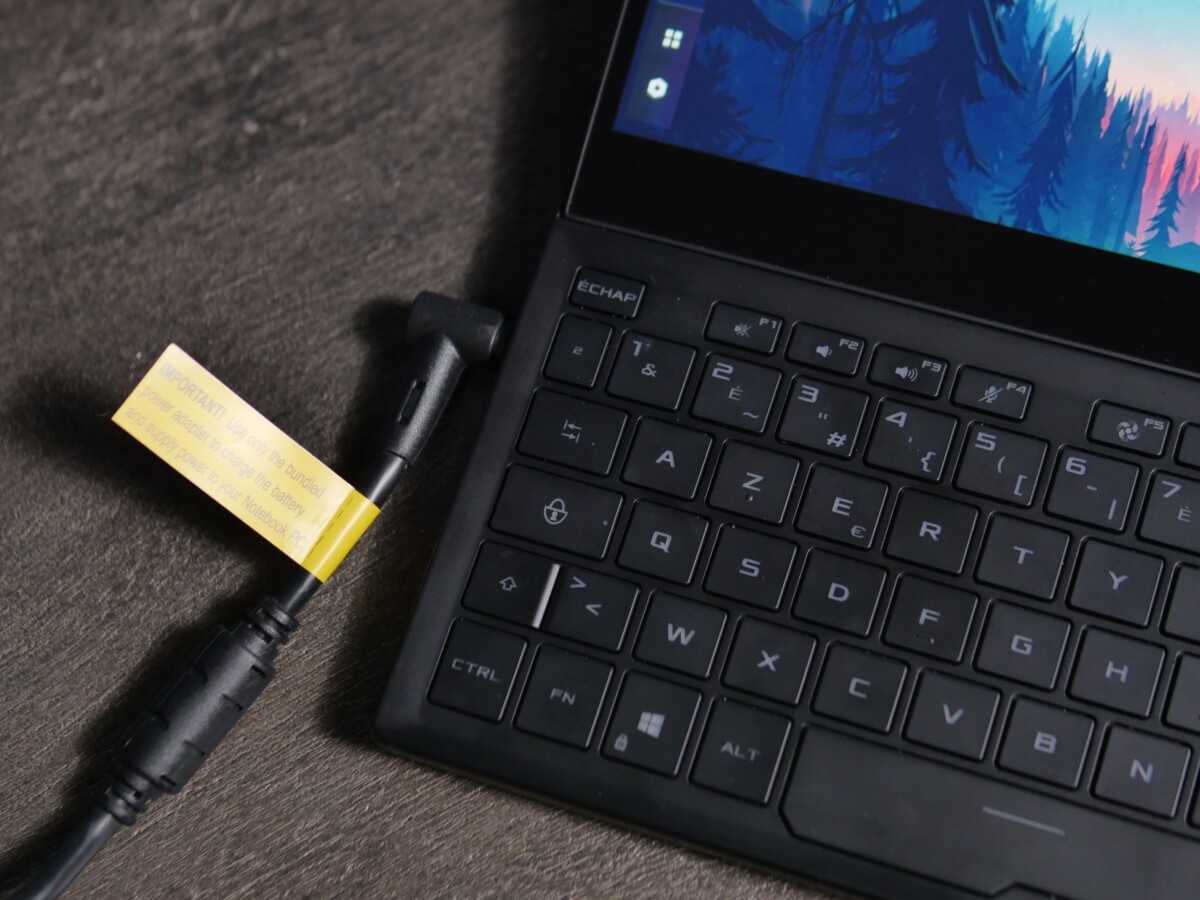 This is really ideal location for the power cable

We liked the presence of a USB 3.2 Gen2 which offers speeds up to 10 Gbps. This is an alternative to the lack of Thunderbolt … since it is a machine with an AMD CPU. You will therefore be able to connect external SSDs to it and obtain very good data transfer rates.

Finally, it remains a laptop with large dimensions. Importantly, it is deeper and heavier (2.5 kg) than other laptops with similar characteristics. This is obviously due to the presence of the second screen. This is something to take into account if you plan to carry it around often.

In the product box, I only found a fairly large 280 Watts charger (compared to 240 Watts on the previous model). Based on feedback from buyers, it appears Asus is also supplying a 100 Watt USB-C Power Delivery charger. The latter can be used in addition when traveling. As you can imagine, it is not enough to supply enough power to the device if you are launching a heavy game.

This is certainly the most interesting part of this test. For having tested an Intel Core i9 (10th) with RTX 2080 Ti no later than 2 weeks ago … this Asus ROG Zephyrus Duo 15 SE is very different. We tested the model equipped with an AMD Ryzen 9 5900HX CPU and an Nvidia GeForce RTX 3080 GPU (TGP 130 Watts) .

How to sum up the performances of this couple? It is much more efficient and much quieter than the Zephyrus Duo 15 (GX550), the autonomy is also noticeably better. Asus has improved the cooling system, with two 45-50mm fans, but that doesn’t explain the improved overall behavior of the machine. 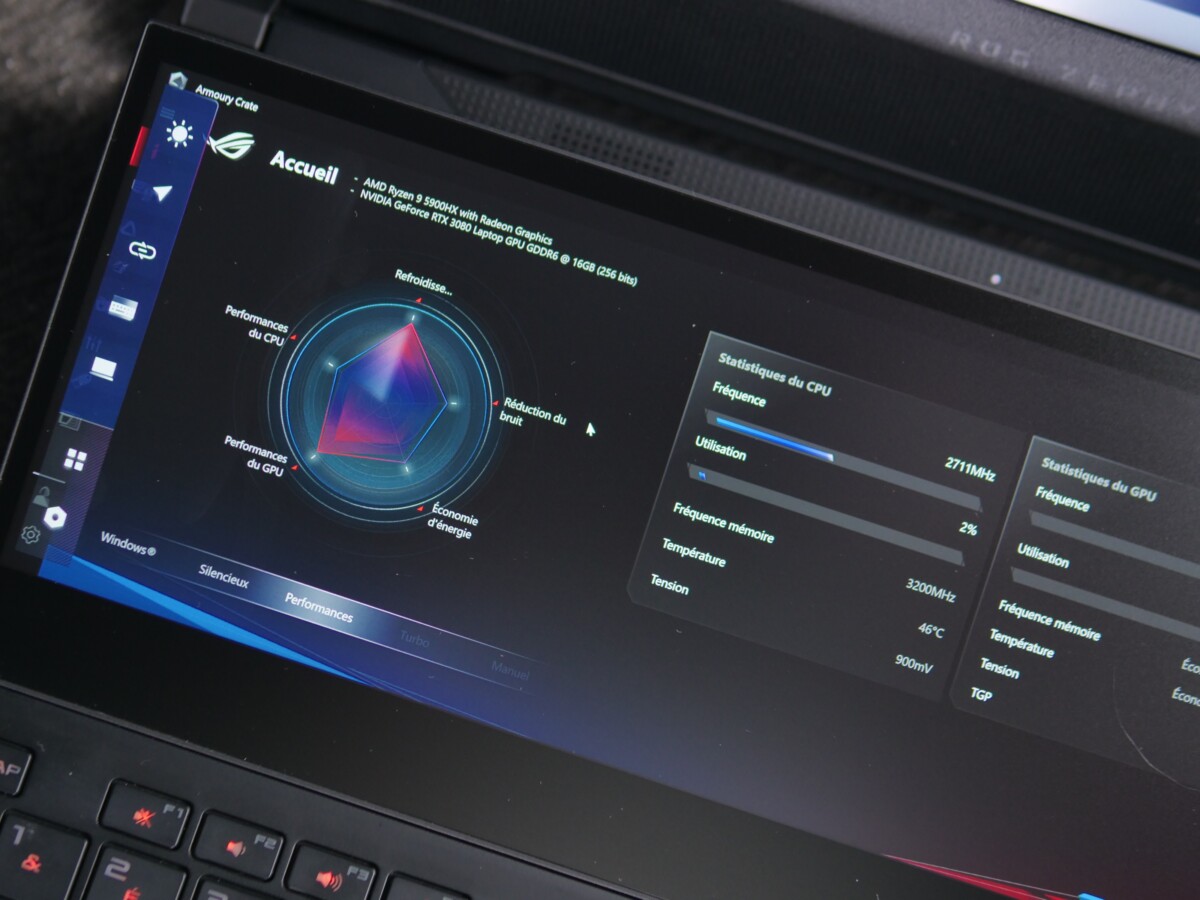 You still have three performance modes. Quiet mode lowers the performance of the machine by approximately 50%.

The fans turn on more rarely, which means the laptop does not make any noise when you do office work. As such, it looks like an ultrabook with a low power CPU. The fans only activate when the RTX 3080 graphics chip is in action. This low noise level is really the result of the AMD Ryzen 9 5900HX chip.

It is only when you throw games or heavy tasks that the ventilation emits a noise of about 40 dB, it can rise to 50 dB during stress tests. Note that above 45 dB, a headset is necessary … but this is not unusual with a gaming laptop.

This performance also allows the Ryzen 9 5900HX to activate its Turbo Core Boost much longer than Intel’s Turbo Boost. We therefore end up with more constant performance, but above all better performance in multi-thread and single-thread. In short, this Ryzen 9 5900HX chip blows up Intel’s most powerful chip today.

With its base frequency of 3.3 GHz (4.6 GHz in Boost mode) and its TDP of 45 Watts, this chip fines the chips from Intel in many situations, in the benchmarks synthetic (Geekbench 5, PCMark 10, Cinebench R20…) but also in concrete applications (Adobe Lightroom, decompression of files, video conversion…).

Regarding graphics performance, as we often repeat with laptops, the dissipation capacity of the chassis is essential. The Asus ROG Zephyrus Duo 15 SE is available in several versions, we had the opportunity to test this with the RTX 3080 mobile . This is a chip that we tested lengthwise in another design with a TGP of 95 W. 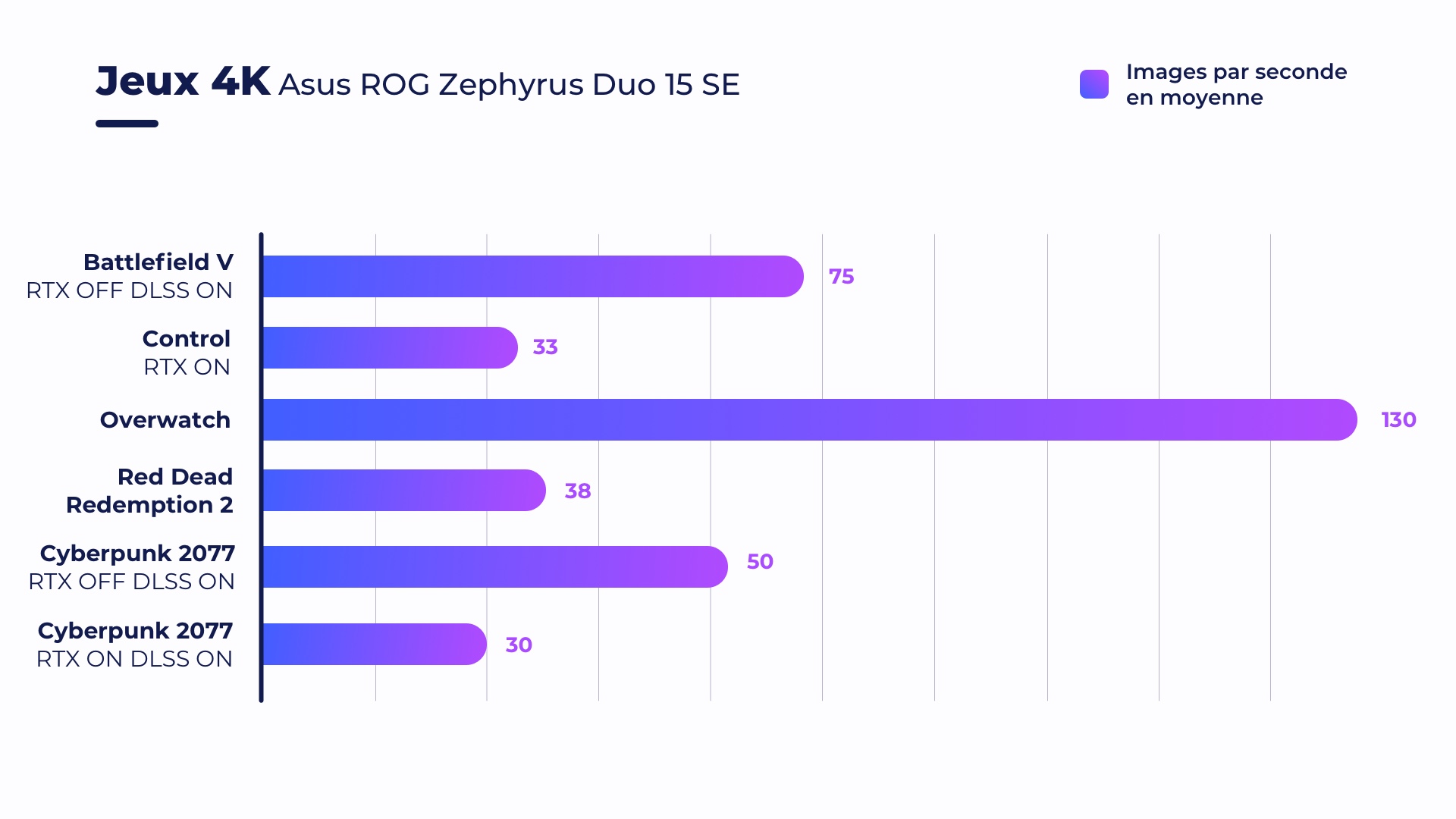 The performances obtained in games

This time around, we wanted to run all games in 4K definition . As you can see everything is playable in high quality even with ray tracing enabled. We also tested competitive games like Overwatch but also Call of Duty: Modern Warfare , you can keep the 4K definition but reduce the graphics quality to pass the 120 fps mark in order to ” use the 120 Hz screen correctly.

If you intend to play exclusively with this computer, it nevertheless seems more logical to us to go for the Full HD @ 300 Hz model. In Full HD, for example, Cyberpunk 2077 runs at more than 60 fps despite the ray tracing activated. . Even in 4K at 30 fps with ray tracing enabled, Cyberpunk 2077 is still playable (and beautiful). Additionally, enabling DLSS dramatically increases performance while ensuring visual fidelity, meaning there is no reason to disable it if the game you are playing supports DLSS 2.0. 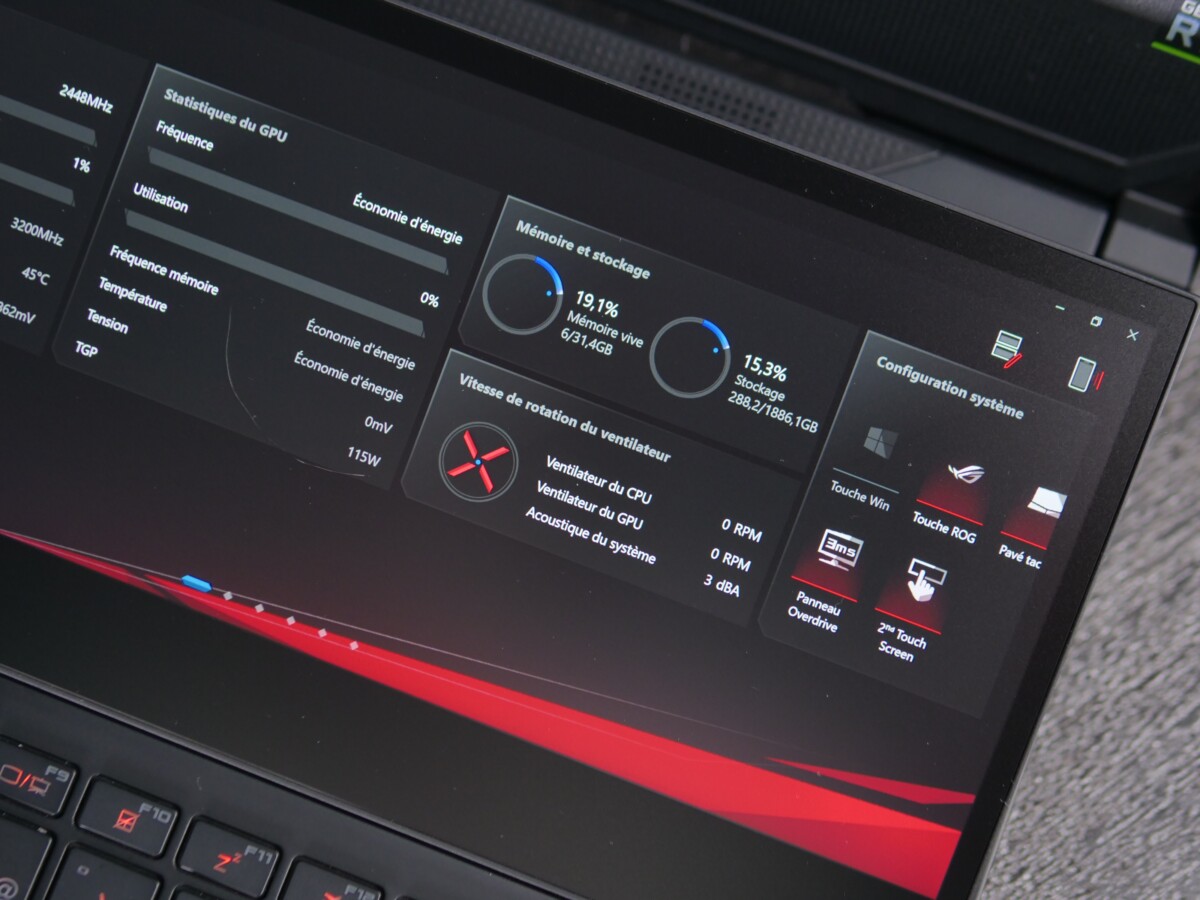 With Armor, you can control everything from the second screen

In short, the architectural advantage of the Ampere GPU creates an even greater gap between the ROG Zephyrus Duo 15 SE and its predecessor, as the GPU offers excellent performance. It can compete with latest generation desktop PCs. Note that these performances are valid for this model of laptop, Asus has managed to exploit the performance of this GPU thanks to a well-designed chassis.

Obviously, not everything is positive with a gaming laptop: autonomy is still its pet peeve despite a massive 90 Wh battery. It does better than its predecessor, but don’t plan on doing more than 3 hours and 30 minutes of office automation or 1 hour and 30 minutes of gaming when the laptop is unplugged. When an ultrabook can exceed 10 hours of battery life, it’s important to ask yourself if the low battery life of a gaming laptop can be a nuisance on a daily basis.

There are several variations of this ROG Zephyrus Duo 15 SE. The model we tested is sold at 3,500 euros (eg at Fnac ), the equivalent model from last year was at 5,000 euros. Asus has therefore lowered the price of this machine overall.